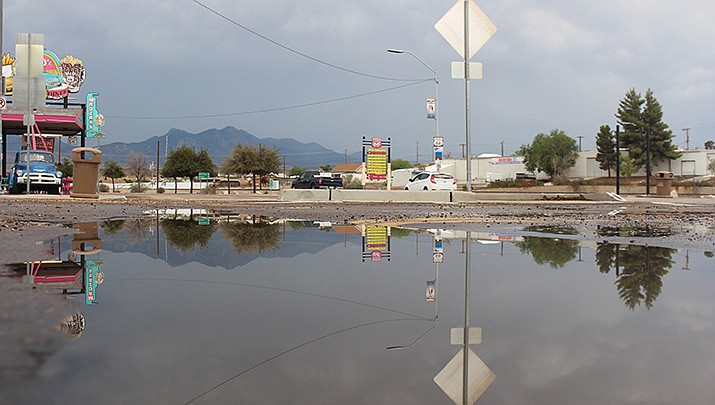 Water gathers along Andy Devine Avenue in Kingman after a recent storm. The forecast by the National Weather Service for Kingman calls for a chance of rain every day through the next week. (Photo by Travis Rains/Kingman Miner)

KINGMAN – Inclement weather is forecast for the Kingman area for the entirety of the coming week, with the greatest chance for precipitation and thunderstorms falling during the day and evening of Sunday, July 18.

The National Weather Service forecasts a 40% chance of showers and thunderstorms Sunday, which will have a high near 96 degrees. The chance for storms and precipitation will drop to 20% Sunday night, which has a forecast low of 78.

Similar conditions are forecast for Monday, July 19 with a 30% chance of rain, though mainly after 11 a.m. Monday’s high will be near 98 degrees with a low of 78 that evening and a 10% chance of shows and thunderstorms mainly before 11 p.m.

Precipitation and thunderstorms are also forecast for the next two days, Thursday and Friday, July 22-23. Thursday will have highs and lows of 94 and 75 respectively, and Friday a high of 92 degrees.

A little more than an inch of rain fell at Kingman Municipal Airport on Thursday, July 15.