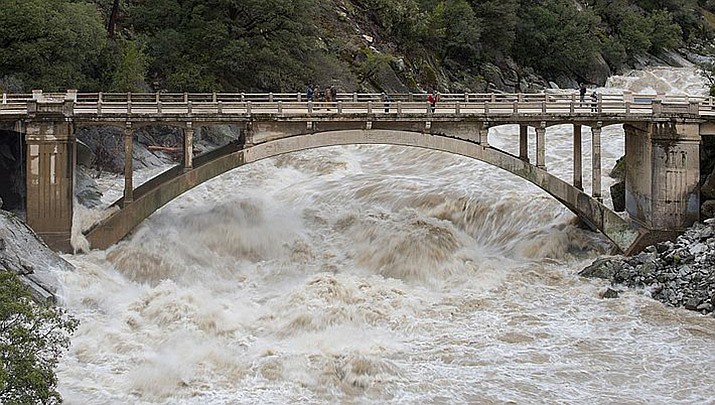 The body of a 4-year-old Pima girl was discovered Monday, July 26, after she was swept away by floodwaters on Thursday. (Photo by California Department of Water Resources/Public domain)

PIMA - Authorities say the body of a 4-year-old girl swept away by floodwaters in southeastern Arizona has been found.

Police in Pima told AZFamily.com that a volunteer searcher spotted the body Monday around 8:30 a.m.

Graham County authorities had been looking for the Pima girl since she went missing Thursday night.

A woman had called the county sheriff’s office and reported she and her children were stuck on top of their vehicle in a wash.

Authorities arrived on the scene and were able to rescue some of the family, but couldn’t find the young girl whose name has not been released.

Meanwhile, north of Phoenix in Cottonwood, authorities continue to search for a 16-year-old girl who had also been stranded in her car.

Verde Valley fire personnel say the teen became stuck Saturday night at a low-water river crossing before being swept downstream. They say some of her belongings were found Sunday.

Verde Valley Fire crews, Cottonwood police and Cottonwood fire crews are all taking part in the search for the girl, who authorities have not identified.

Much of Arizona has been slammed with monsoon thunderstorms since Thursday. The resulting rain, winds and lightning caused flooding and outages.

WINONA, Kan. - An Arizona couple has died after their Jeep collided with a cow that had wandered onto U.S. Highway 40 in western Kansas, authorities there said.

Raymond Kennedy, 45, of Glendale, Arizona, and Brenda Carrasco, 54, of Peoria, Arizona, were traveling eastbound in a Jeep Wrangler when it hit the cow and rolled several times, according to the Kansas Highway Patrol.

Both Kennedy and Carrasco were pronounced dead at the scene.

Zuercher to step down after 8 years as Phoenix City Manager

Zuercher announced Monday he plans to retire Oct. 8, saying he’s proud to have worked to put the city “on a sound financial footing” while striving to bolster the city’s leadership ranks and promote economic growth.

Mayor Kate Gallego and the City Council will oversee the process of hiring Zuercher’s replacement.

The 56-year-old was appointed acting city manager in 2013 to fill a vacancy and took on the position permanently in 2014.

Gallego said Zuercher has been a “thoughtful, wise, respected leader” and made the city stronger during his tenure.