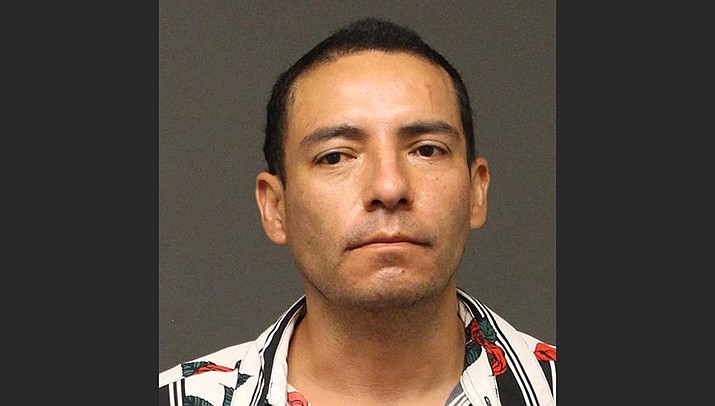 KINGMAN – Raymond Michael Lopez, 43, of Kingman, is alleged to have left his 1-year-old son inside a parked, non-running vehicle with the windows up, the Mohave County Sheriff’s Office reports.

MCSO wrote in a news release that at 3:30 p.m. Wednesday, July 21, deputies received a call from a female subject stating that she had gone to pick up her two kids from school and left her husband, identified as Lopez, and their 1-year-old son in the car outside of the school.

Lopez was a passenger in the vehicle, according to the sheriff’s office.

Upon exiting the school with her two kids, the female found that the vehicle was gone.

The reporting party and the children walked to their residence in the 2300 block of Leroy Avenue, but the vehicle was not there either. The woman then told law enforcement that she and the two children walked to her parents’ house a short distance away to call and report the vehicle and child as missing, and that Lopez had been intoxicated when he took the vehicle.

According to the sheriff’s office, she walked back to her residence a short time later to find Lopez sleeping inside the home. Neither the child nor the vehicle were there.

Deputies contacted OnStar to get a location on the vehicle and were advised that the car was stationary in the 2300 block of Lass Avenue.

Deputies located the vehicle and found the child still strapped into a car seat inside the non-running car with the windows up, according to MCSO.

The child was removed from the vehicle and evaluated by medical personnel, and found to have no injuries.

Video surveillance from a nearby residence reportedly showed Lopez park the vehicle and walk away from the car with the child still inside.

Lopez was arrested on suspicion of felony child abuse and booked into the Mohave County jail.