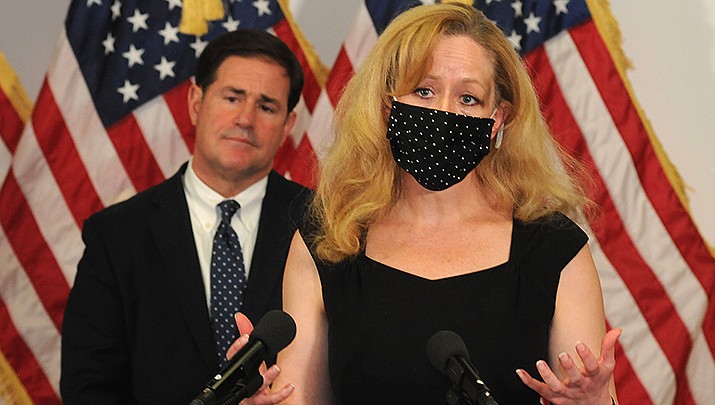 PHOENIX – Arizona's top health official, who has been the face of the state response to the pandemic, is leaving the role next month, Gov. Doug Ducey said Wednesday.

“When Cara Christ became a doctor, she did it to help others and save lives. That’s exactly what she’s done,” Ducey said in a statement. “She dedicated countless hours to protecting millions of Arizonans from the COVID-19 pandemic – and she’s done it with grace, stability and confidence.”

Her last day will be Aug. 27, making her the department's longest serving director, according to Ducey. She assumed the role in May 2015 after working in other capacities there.

Christ rose to national prominence during the height of the COVID-19 pandemic and after vaccines became available. Under her leadership, Arizona was praised as a model for other states after setting up an around-the-clock mass vaccination site at State Farm Stadium in Glendale. In February, she gave a virtual tour of the facility to President Joe Biden and Vice President Kamala Harris.

She has had her share of criticism during the pandemic as well. Some questioned why Christ did not lobby for more restrictions or mitigation measures during some case surges, especially when the state's major hospital systems feared being overwhelmed.

One of those critics was her predecessor, Will Humble. He worked under Republican Gov. Jan Brewer and left two months into Ducey's first term.

“I hope we don’t get someone who sees their job as working for the governor,” said Humble, who leads the Arizona Public Health Association. “Then you will be getting somebody unwilling to push back and consider the ramifications of the coming decisions.”

During his tenure, Humble wasn't always in sync with Brewer's office but that wasn't unusual.

State health officials “work for the people of Arizona. Yes, they report to the governor but they work for us,” Humble said.

Pam Kehaly, Blue Cross Blue Shield of Arizona president and CEO, said in a statement that Christ will work in the areas of medical policy and provider relations. She described Christ, who she collaborated with at mass vaccination sites, as someone “known for thinking big, approaching health strategically, and leveraging the best of medicine and science.”

Christ's departure comes as Arizona reported 1,361 new COVID-19 cases and two deaths on Wednesday. The state, like others in the U.S., is seeing another surge in coronavirus cases, but the newest numbers are a slight drop from figures documented over the past week.

Hospitalizations from the virus also rose to 973, with more than a third of them, or 332, occupying ICUs.

The increases being seen nationwide prompted the Centers for Disease Control and Prevention to reverse some masking guidelines Tuesday. The agency recommended that even vaccinated people wear masks indoors in parts of the country classified as having substantial or high transmission. It also urged students and staff at schools to wear masks regardless of vaccination status.

Arizona health officials also said people who are not fully vaccinated have made up the majority of coronavirus cases, hospitalizations and deaths since March.

Over 6.7 million vaccine doses have been administered in Arizona to date. Over 3.7 million people – 51.7% of the state’s population – have received at least one shot of vaccine and over 3.3 million people are fully vaccinated.