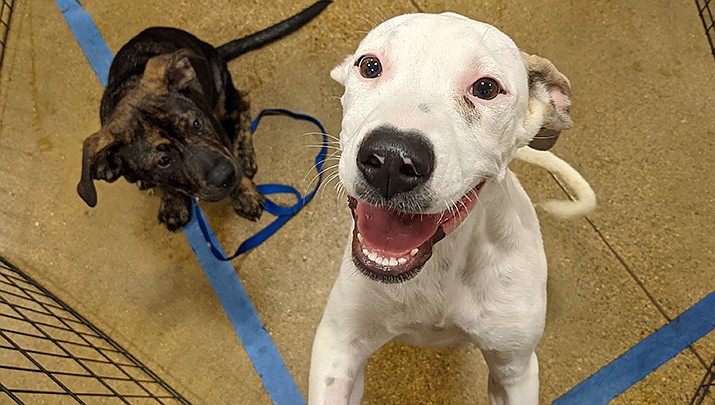 The Mohave County Animal Shelter received 500 animals in July alone, and is putting out a call for help to community members able to adopt dogs, cats, puppies and kittens. (Photo by Travis Rains/Kingman Miner)

KINGMAN – To say the Mohave County Animal Shelter is overcrowded would be an understatement, as it has received a “record number” of animals, approximately 500, in July alone.

Community members are being asked to come to the rescue, said Nicole Mangiameli, shelter manager. While the shelter is not yet in the position of having to euthanize aggressive and terminally-ill animals to make room for more cats and dogs, Mangiameli said the shelter has never been closer to having to do so.

She said euthanasia is always the last resort for any shelter, saying that “we would try anything before letting that happen,” including reaching out to partners and putting out calls for fosters. After all, the county shelter’s goal is always to “save all the animals.”

“We’re not there, but don’t let us get there; we need their help,” Mangiameli said of the shelter’s overcrowding and the call to the community. “I feel very fortunate that this is the first time in the past two years that we have ever been inclined that way, but this is the closest because of the sheer volume of animals coming in. But we’ve been fortunate, the Western Arizona Humane Society, the Humane Society of Mohave County, and then our lovely partners are taking animals.”

She said that 500 figure is “mind boggling,” and attributed the increase, at least in part, to the monsoon season and associated thunder, lightning, high winds and swift water.

“I think the storms have caused there to be an additional stray problem,” Mangiameli said. “Some of those animals are going back to their owners, but not all try to get their animals back.”

If the shelter can see the adoption of a dozen to 20 dogs and cats over the course of the next four or five days, “it would make a tremendous difference,” Mangiameli said.

“That frees up a lot of space, and as I like to say to any adopters out there, if they adopt one, they save two because they’ve opened up space for the next one,” she said. “If they adopt two, they save four, and that’s the truth.”

The shelter is putting out a call to all who have considered, or are currently considering, adopting and fostering animals.

“Maybe they lost a pet, maybe they haven’t been ready,” Mangiameli said. “But now is the time. Our assortment of beautiful dogs and cats is mind blowing. They’re sweet, lovely family animals.”

As always, donations made to Friends of Mohave County Animal Shelter go toward surgeries, medications and hospitalization bills for animals.

“Those donations go a long way,” Mangiameli said. “Also, we’re always up for accepting food, blankets, toys and treats. Those are really a big deal. Those things help the comfort of our shelter guests.”

For more information or to donate, go to https://www.friendsofmcas.org/.