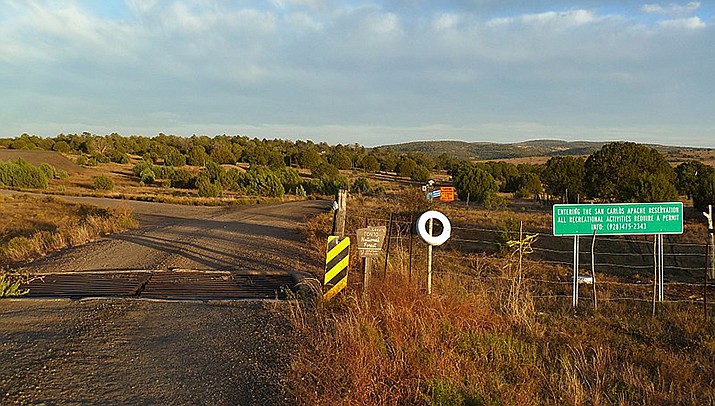 The San Carlos Apache Tribe has the coronavirus pandemic on the reservation, pictured here, under control. (Photo by Chris English, cc-by-sa-3.0, https://bit.ly/2TtYQSN)

PERIDOT - Several small beige-colored buildings sit along the entrance to the hospital on the San Carlos Apache reservation.

People were being screened for COVID-19 symptoms before they could go inside. Lately, only one of the screening buildings remains as coronavirus cases declined in the southeastern Arizona community.

The San Carlos Apache Tribe has seen a dramatic turnaround over the past year when one-third of its on-reservation population was infected with the coronavirus. The average number of positive COVID-19 cases is down to less than 1% a week, according to the the San Carlos Apache Healthcare Corp.

Early education campaigns, an emergency declaration, and other safety precautions helped the community prepare even before it reported its first case, according to the Arizona Republic.

“We were blessed to have that time,” said Victoria Began, chief executive of the health care corporation.

As testing failed to keep up with demand across the state, San Carlos Apache ensured anyone who sought testing could get it and ramped up vaccine distribution without a need for mass vaccination events.

When cases spiked, Rambler said the tribe set up checkpoints at the reservation boundaries to keep visitors out, issued a stay-at-home order and imposed regulations on businesses operating in the community. A mask mandate remains.

The tribe also set up an alternative care site at the Apache Gold Casino Resort for people who needed to isolate from their families or quarantine. The effort was recognized by the National Indian Health Board.

“No one went home if they tested positive,” said Tara Kitcheyan, chief patient experience officer for the San Carlos Apache Healthcare Corp. “They were provided a safe space to isolate and heal.”

The alternative care site shut down at the end of March as the infection rate hit record lows.

The health care corporation worked to stock up on equipment and increase hospital units ahead of the pandemic reaching the reservation. Hundreds of COVID-19 patients in need of higher levels of care were transferred to hospitals off the reservation, a pattern similar within other tribes.

The loss of tribal citizens was compounded by the tightknit nature of the community.

Kitcheyan said the health care corporation adapted along the way while ensuring that traditional Apache medicine was available to patients as well and tweaking guidelines from the U.S. Centers for Disease Control and Prevention on vaccine distribution to fit the tribe’s needs.

“I think that’s what has made this a successful turnout,” Kitcheyan said. “We listen to our community.”

The tribe has vaccinated its citizens at a quicker pace than the state, starting in December. The goal is to achieve 80% herd immunity, or 10,800 of those who live on the reservation. The tribe is more than three-quarters there.

The tribe saw a massive drop in positive COVID-19 cases by the end of January, followed by single-digit numbers in cases daily.

“It’s amazing what we’ve done to help our people because our population is so small in comparison to the rest of the world,” said Isaiah Belknap, chief executive mentee with the San Carlos Apache Healthcare Corp.

“We had to do everything we can,” he added. “We had to fight and be innovative.”