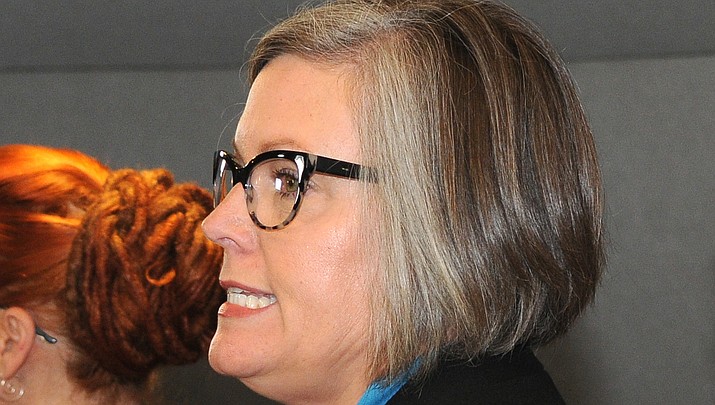 Democratic Arizona Secretary of State Katie Hobbs has announced Wednesday, May 2 that she is running for governor. (File photo by Howard Fischer/For the Miner)

PHOENIX - Arizona Secretary of State Katie Hobbs on Wednesday announced her candidacy for the Democratic nomination for governor in 2022 while denouncing the Republican-controlled state Senate’s ongoing audit of the 2020 presidential election.

Hobbs said in a statement she was running for governor “to deliver transparency, accountability, and results for Arizonans” and would work as governor to “put aside our differences and work to solve the serious problems facing Arizona.”

The Arizona Senate’s audit of election results in Maricopa County was launched as supporters of former President Donald Trump suggested without evidence that the election was stolen, giving President Joe Biden a narrow win in Arizona.

“Right now, our state government is being run by conspiracy theorists who are more focused on political posturing than getting things done, and that needs to change,” Hobbs said in her statement.

The only Democrat in the race so far is Marco Lopez, a former Nogales mayor who rose rapidly to a senior position in President Barack Obama’s administration.

Arizona officials to finalize how back-to-work aid will work

Ducey announced May 13 that the bonuses would go to residents who stopped receiving unemployment benefits, returned to work by September and kept their job for at least 10 weeks, ABC15 reported.

But ABC15 learned that the state Department of Economic Security must now create an online portal where residents could upload the documentation and has yet to chose a company to create the website.

The program is scheduled to begin accepting applications July 10.

Department officials have not yet provided information about how to access other back-to-work incentives mentioned by Ducey, including $7 million for community colleges and $6 million for GED assistance.