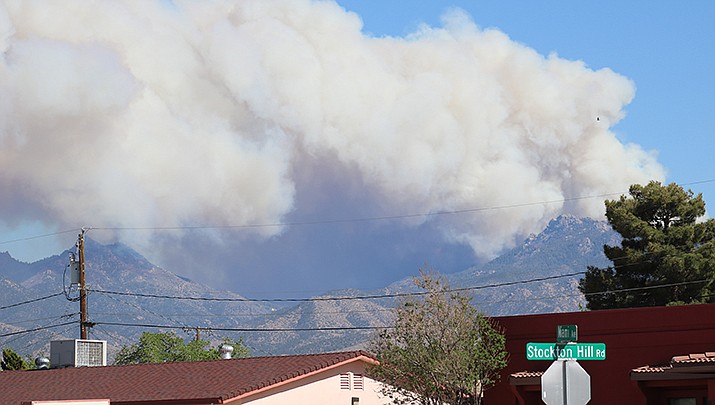 The Arizona Legislature will meet in special session this week to consider boosting the money available for fighting wildfires. (Miner file photo)

PHOENIX – The Arizona Legislature will convene in special session this week to consider adding $100 million in funding for fighting wildfires and to boost the amount of money available to clear hazardous brush and deal with the damage of flooding from fire-ravaged mountains.

Gov. Doug Ducey formally called for the special session Monday after announcing last week during a tour of two large fires burning in south-central Arizona that he planned the session to focus on the issue.

“This wildfire season has already been devastating, and we still have a long, hot summer ahead of us,” Ducey said in a statement. “While Arizona has strong wildfire suppression and prevention efforts in place, we need to do more.”

House Speaker Rusty Bowers said the session is badly needed after firefighting efforts used up funding for the current and coming year. Details of the funding requests were finalized at a meeting Monday afternoon between House and Democratic leaders of both political parties.

Bowers said Sunday that he thought between $10 million and $20 million would be needed for the state Fire Suppression Fund and possibly $50 million for flood prevention and other recovery efforts. “It could be more, and I’m willing to do more,” he said. “We have the funds now, and we need to make sure that we are ready."

The number turned out to be quite a bit more – $25 million to pay for state prisoners to clear brush under direction of state forestry officials and $75 million for the fire fund, to help affected people and property owners recover and to prepare for the fallout from multiple large fires that have burned across the state so far this fire season.

“This wildfire season has already given us an idea of what’s to come, and we need resources to protect Arizona’s communities and first responders,” Rios said in a statement. “This investment is necessary to support those in need and help safety officials fight wildfires in the state, while also providing aid for communities afterward.”

The special session will run for three days beginning Tuesday along with the regular session that has been stalled over the inability of lawmakers to reach a deal on the overall state budget.

Bowers sought the session after two fires broke out in the mountains southeast of Phoenix early this month that together blackened 257 square miles ( 666 sq. km.) of brush and forest near Globe. One fire is mainly contained while new evacuations were ordered for the other Monday. Other fires are burning across the state.

The governor’s January budget proposal noted that state firefighting costs exceeded $39 million in the last five years while appropriations were only about $20 million. He sought a boost in that spending.

The governor also sought to increase the amount of cash put into an emergency fund he controls and often uses to make up the difference in actual firefighting expenses.

Firefighting efforts may be paid for with either state or federal funding, depending on the fire's location on public or private land, among other factors.

Bowers lost his longtime family retreat home last week in one of the fires burning near Globe and Miami.

“I know firsthand how devastating the wildfires are this year,” Bowers said in a statement. “Families have been displaced, nonprofits are working hard to support those in need, and firefighters are working day and night to contain fires."

The Legislature remains in session as lawmakers try to pass a $12.8 billion budget and massive tax cuts, so there is no pressing need for a special session to get the new funding. But Ducey said a special session will help focus lawmakers on a single subject that has bipartisan support even as they are deadlocked on the budget.