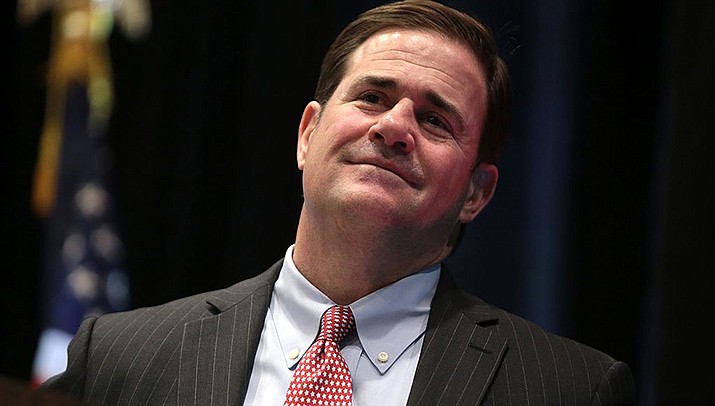 The Republican governor's order Tuesday says students at the state's three public universities and community colleges can’t be required to get the vaccine, submit vaccination documents, be tested or forced to wear masks. (Photo by Howard Fischer/For the Miner)

The Republican governor's order Tuesday says students at the state's three public universities and community colleges can’t be required to get the vaccine, submit vaccination documents, be tested or forced to wear masks.

It came after Ducey reacted to the new ASU policy for students attending class in person this fall in a series of tweets Monday night. He said the policy has “no basis in public health” and that even the Biden administration has been more reasonable.

But the governor also included a screenshot of a quote from the Centers for Disease Control and Prevention director, Dr. Rochelle Walensky, that appeared to contradict his own position.

In an interview with KTAR radio before Ducey's executive order, ASU President Michael Crow said he believes the governor and others opposed to the new policy may have misinterpreted it, calling it essentially an extension of current rules that say vaccinated people don't need to wear masks in most cases.

“I think what happened here was some people thought that we were requiring vaccinations, initially, which we weren’t,” Crow said. “I think that’s just gotten some people very upset, and hopefully they’ll take a closer look at it."

Crow said the university has been consistently pushing for a full return to in-person learning and is not requiring COVID-19 vaccines as many universities are doing.

“We’re allowing freedom of choice," Crow said. “So we expect vaccinations, but if you don’t get vaccinated, then you’ve got to follow CDC guidelines for institutions of higher education, which are quite clear."

The ASU policy, announced in a letter Monday from Vice President of Student Services Joanne Vogel, said the university expects students to get a vaccine since they are now widely available and are “highly effective at preventing COVID-19 infection and reducing the spread of the virus.”

Students who do not provide proof of vaccination will have to wear a mask indoors and outdoors, submit to twice-weekly virus testing and do a daily online health check.

Ducey reacted by saying the vaccine works but is a choice and calling public education a right that taxpayers are paying for.

“This policy is social engineering at its worst,” Ducey tweeted. “Health policy should be based on science, not virtue signaling.”

He announced that Republican state Sen. T.J. Shope will introduce legislation to make his executive order a law. Shope and other GOP lawmakers had tweeted that they opposed the ASU rules.

GOP Rep. Travis Grantham called the policy “discriminatory and onerous” and called on the university to immediately rescind it. He said he would propose withholding funding from ASU if it remains.