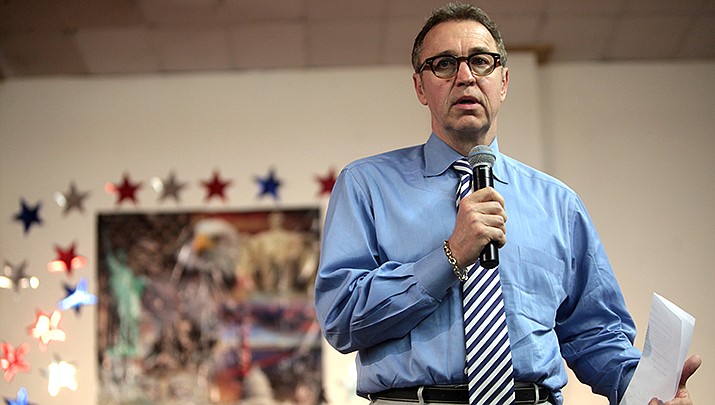 Former Arizona congressman Matt Salmon has announced he will seek the Republican nomination for governor of Arizona. (Photo by Gage Skidmore, cc-by-sa-2.0, https://bit.ly/2Uc0kS9)

PHOENIX – Matt Salmon, who came within 11,819 votes of becoming governor nearly two decades ago, is making another bid for the office.

But the former state legislator, congressman and lobbyist first has to survive what is becoming an increasingly crowded Republican primary. And Salmon, in his Wednesday announcement, is seeking to prove that he is as conservative – if not more so – than anyone else in the race.

"Today, the Arizona values we cherish are under attack from Washington and liberals here at home,” he said in his prepared statement, decrying "open borders, closed classrooms, crushing tax hikes and socialism, censorship and cancel culture.”

The other three GOP contenders have made similar claims.

But Salmon is jumping into the race with something they don't have: an endorsement from Club For Growth, a political action committee primarily focused on cutting taxes that has resources to help finance a campaign.

And he also has the record of being a founding member of the Freedom Caucus while he was in Congress.

Salmon, in a parallel video announcement, pronounced himself "100% pro-life” and touted his “A” rating by the National Rifle Association, all while decrying the "radical agenda” of Democrats, complete with photos of those Democrats that Republicans love to hate, ranging from Joe Biden and Bernie Sanders to Nancy Pelosi and MSNBC commentator Rachel Maddow.

And there also were references to what have become the latest GOP talking points, including his promises to "protect election integrity” and "strengthen voter ID.”

What Salmon does have more than any of the other Republican contenders is an extensive record.

As a state senator first elected in 1990, he backed various tax-cut measures.

But he also was behind a move to abolish both the Arizona Lottery and parimutuel wagering on horses and dogs, saying once the state did that it could avoid having tribal casinos.

What followed was six years in the U.S. House, after which he stepped aside keeping his pledge to serve no more than three terms.

That led to the gubernatorial bid in 2002 where he gained the GOP nod after trouncing Secretary of State Betsey Bayless and Treasurer Carol Spinger. That teed him up to run against Democrat Janet Napolitano who was attorney general at the time.

But the race was complicated by the entry of Richard Mahoney, a former Democratic secretary of state, who ran as an independent and picked up nearly 85,000 votes, and Libertarian Barry Hess tallying more than 20,000.

Salmon said afterwards he was hampered by something else: Republicans who supported his policies but said they would not vote for him because he is a member of the Church of Jesus Christ of Latter-day Saints.

This year's GOP gubernatorial race is shaping up as a fight over who can prove they are the most conservative.

State Treasurer Kimberly Yee became the first in the race, touting her loyalty to Donald Trump and his border and economic policies.

"President Trump's America First agenda had our economy booming like never before,” she said in her announcement video. "But now, our way of life is under attack by the corrupt press, reckless corporate leaders and politicians who put socialist ideals over people, our freedom of speech and our elections.”

She also is touting her opposition to abortion and being a "proud NRA life member."

Developer Karrin Taylor Robson launched her campaign with a slap at the Biden-Harris administration. She promised to "fight for Arizona values” and said she is "committed to do whatever it takes to defend Arizona from the radical left.”

Former Phoenix TV anchor Kari Lake got into the race with promises of protecting election integrity and requiring voter ID, securing the border and protecting the Second Amendment.

She quit her job, complaining about a "disturbing shift in journalism.” And Lake said she is pro-life – “always have and always will be.”

The survivor of the Republican primary will go on to face whoever ends up representing the Democratic Party. So far the main contenders include former Nogales Mayor Marco Lopez and Secretary of State Katie Hobbs.