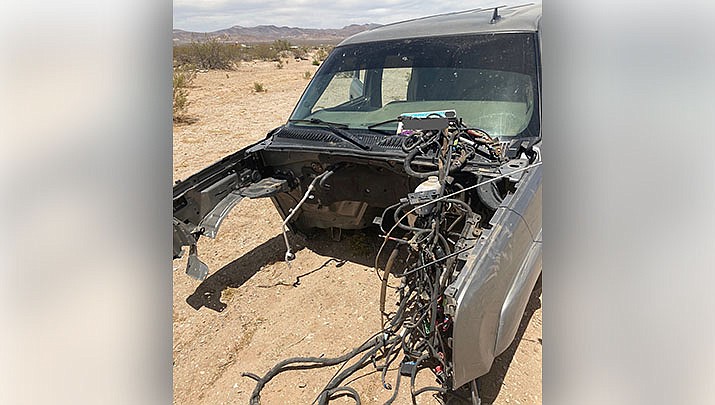 This is one of the stolen vehicles discovered at a chop shop in Dolan Springs by a multi-agency task force this month. (MCSO photo)

KINGMAN – A multi-agency task force to “address area crimes and help to create an atmosphere of order and lawfulness” in Dolan Springs during the week of June 7 reportedly resulted in the discovery of 11 stolen vehicles and two properties identified as being used as chop shops.

Two search warrants were executed on separate residences, where MCSO reports that a total of six stolen vehicles were recovered.

An additional warrant was executed for the residence of a burglary suspect, where a stolen trailer and thousands of dollars of the victim’s property were recovered.

There were 11 stolen vehicles recovered in total during the detail, the sheriff’s office wrote.

“Investigations found that the vehicles are being stolen from Nevada and brought to the Dolan Springs area and being dismantled,” the news release reads. “At least two properties were identified as being used as chop shops.”

The investigations into those properties are ongoing.

Using the more than 50 contacts made with residents in the community, law enforcement was able to make approximately 13 arrests ranging from burglary, possession of stolen property, prohibited possessor, possession of dangerous drugs, possession of drug paraphernalia, possession of heroin, alcohol offenses and traffic offenses.

“We will continue to combat crime countywide, including our most rural of areas, in order to provide our citizens with a safe and secure place to live and work,” Sheriff Doug Schuster said in the release. “This detail was successful due to the outstanding work of our deputies and all of our allied agencies involved.”

The sheriff said Detective Sgt. Davin Coffin was instrumental in organizing and managing the effort.

“The feedback from the community was overwhelmingly positive,” the release continued. “There were no complaints taken and no use of force was used during the detail. Citizens were constantly stopping and thanking deputies for the positive impact they were creating within their community.”