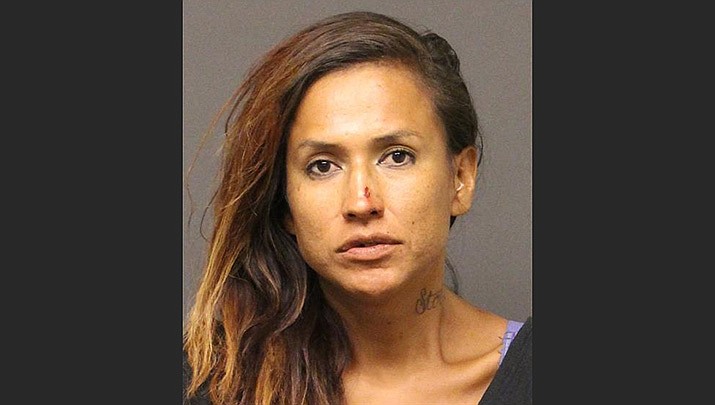 KINGMAN – Katlynn Marie, 38, of Phoenix, was arrested by the Mohave County Sheriff’s Office on Thursday, June 17 after allegedly stealing more than a dozen lottery tickets at gunpoint at a gas station in the 14000 block of N. Pierce Ferry Road in Dolan Springs.

MCSO wrote in a news release that a gas station employee reported at 9:15 p.m. that a female entered the store and insinuated that she was armed with a gun prior to stealing approximately 16 lottery tickets. The subject also demanded the gas pumps be activated, at which point she fueled a vehicle and left the scene.

During the investigation, Arizona Department of Public Safety troopers received a report of a traffic accident on Interstate 40 near Kingman. It was reported that after the accident, a female exited her wrecked vehicle and attempted to steal a citizen’s vehicle. According to that report, the suspect threatened that she had a gun and would shoot the victim. She then ran into the desert, according to law enforcement.

A perimeter was established and a search implemented with Kingman Rangers, DPS, the Kingman Police Department, and MCSO deputies and K-9s. The suspect was located and taken into custody by DPS.

The investigation reportedly revealed that the female taken into custody was the same suspect who had robbed the gas station. The vehicle she was driving was reported stolen out of Las Vegas in a strong-arm carjacking.

That suspect was identified as Marie. She was turned over to MCSO and transported to the Mohave County Adult Detention Facility on suspicion of felony robbery, as well as a felony arrest warrant out of Maricopa County.

The robbery case remains under investigation. Additional charges may be pending from DPS related to the incident that occurred on I-40.