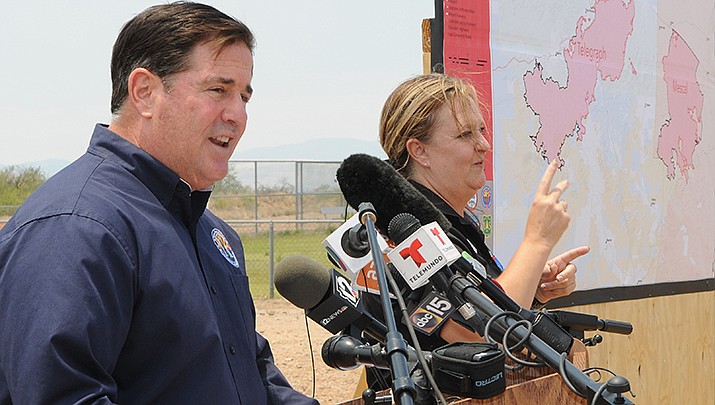 Gov. Doug Ducey speaks at a press conference during a wildfire near Globe earlier this month. (Photo by Howard Fischer/For the Miner)

PHOENIX – Arizona Gov. Doug Ducey on Friday signed a bill rushed through in a special legislative session that provides $100 million in funding this year to battle wildfires, react to the damage they cause and to create a new force of more than 700 state inmates to clear brush.

The Republican called the bill he signed at the Capitol an important step in bringing relief to rural communities that have been impacted by a series of wildfires this year.

“As many Arizonans know, we are in the midst of another catastrophic wildfire season,” Ducey said. "People and pets have been displaced, homes have been burned down, vast swaths of forest and desert have been decimated. It’s been horrible.”

The $100 million appropriation includes $25 million to pay for 720 state prisoners to clear brush and other flammable material under direction of state forestry officials and some contract clearing operations. Ducey proposed that spending in his January budget plan. The legislation includes money for those crews for the next two years that adds another $70 million in spending.

There’s also $75 million for firefighting efforts to help affected municipalities, people and property owners recover and to prepare for flooding and other fallout from large fires so far this fire season.

The moves come as several large fires are burning across the state, with one near the mining town of Globe already among the top 10 ever seen in the state. As of Friday morning, the blaze in the mountains 90 miles southeast of Phoenix has consumed 275 square miles of brush and timber. Several small communities were under evacuation orders and others were under evacuation warnings.

That large fire alone has consumed 52 structures but is more than 70% contained. Other smaller fires are burning as a heat wave that began early this week continues. The temperatures are so high that large aerial tankers can’t always fly. Severe drought has also dried up water sources helicopters would normally access to drop on the flames.

House Speaker Rusty Bowers, who lost a home he used as a family retreat in the fire, said he was impressed how rural residents have responded.

"We’re grateful for the communities, how they pull together, or they help each other and call each other," Bowers said. “It's an example of what rural folks do under pressure.”

The bill has had overwhelming bipartisan support in the Legislature, although many Democrats argued that the state needed to take major action to react to climate change that is driving the drought and resulting fires.