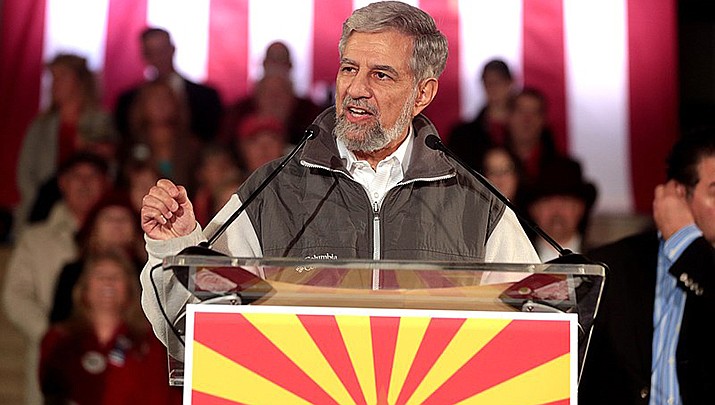 He founded Fair Maps Arizona, an effort to influence the redistricting process and said in his letter he’ll continue working on the effort “until the job is done.”

“As your Governor, I will bring my outsider perspective, my business experience and my conservative principles to attack these problems,” Gaynor wrote.

Gaynor narrowly lost the 2018 race to Democrat Katie Hobbs. He spent $2.6 million of his own money and emphasized his business experience as the owner of a Los Angeles printing plant. Critics labeled him a wealthy donor who paid his way into the race.

Hobbs is seeking the Democratic nomination for governor along with Marco Lopez, an investor and former adviser to Janet Napolitano when she was Arizona governor.

TUCSON – Police have made an arrest in connection with the vandalism of a Tucson synagogue.

Beaver is accused of spraying anti-Semitic graffiti on the Chabad on River Synagogue earlier on June 7. The graffiti included a swastika and a slur.

Mayor Regina Romero and Police Chief Chris Magnus both say the incident had troubled the community.

PORTAGE, Wis. – An Arizona man has been convicted of shooting his wife to death almost 33 years ago.

A Columbia County jury found Mark Wayne Bringe, 73, guilty of first-degree murder with a dangerous weapon in connection with the death of Lorelei Bringe.

The woman was found dead outside her home in Poynette in August 1988, the Portage Daily Register reported. She had been shot in the head. She was 33 years old when she died. Two guns were found near the body. When Mark Bringe told detectives in a 2017 interview about how he and his father-in-law discovered the body, he indicated that he had prior knowledge of his wife’s death, the location of her body and didn’t take action, according to the criminal complaint.

Prosecutors charged him in February 2018 and police arrested him the same day at his home in Sahuarita, Arizona. Investigators contend that he killed his wife in a fit of jealousy because she was having an affair with a man in Michigan. Mark Bringe argued that she committed suicide. He now faces life in prison.

A sentencing date hasn’t been set yet, according to online court records.