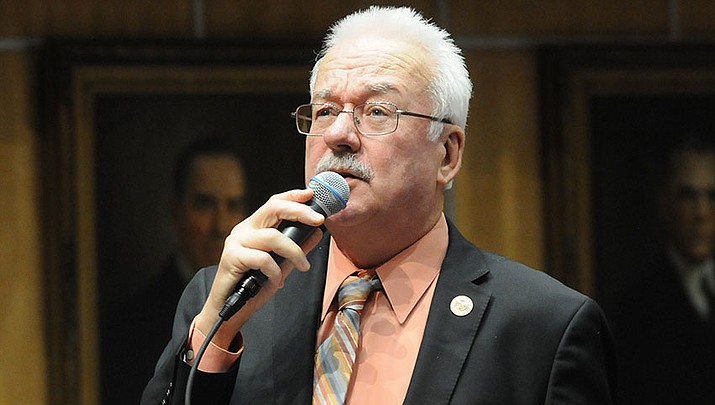 Republican lawmakers are poised to send two more measures changing the rules for citizen initiatives to the ballot for voter approval, joining another one that was referred to the 2022 ballot on Friday. (Photo by Howard Fischer/For the Miner)

PHOENIX – Republican lawmakers are poised to send two more measures changing the rules for citizen initiatives to the ballot for voter approval, joining another one that was referred to the 2022 ballot on Friday.

The measures that were cleared for Senate debate Monday would ask voters to change the state Constitution to require a supermajority vote to pass their own laws and to confine them to a single subject. Both already passed the House and are now expected to get Senate votes in the coming days as the GOP-controlled Legislature races to adjourn for the year.

The measure approved for the ballot last week would change the Constitution and give the Legislature more power to alter citizen initiatives approved by voters if any portion is found to be unconstitutional. It would water down the Voter Protection Act, which sets a high bar for lawmakers to change voter-approved initiatives and prohibits changes that undermine voters' intent.

Republican lawmakers have long complained about initiatives pushed by progressive groups, saying it's virtually impossible for the Legislature to change them because of the Voter Protection Act and they often are backed by money from outside the state. They have significantly tightened the rules in recent years to make it harder to get initiatives on the ballot and easier to kick them off, but this is the first time they have asked voters to change the rules themselves.

Democrats and progressive groups say initiatives are often the only way to do things like legalize marijuana or increase the minimum wage because GOP lawmakers consistently block any legislation on such issues. Voters raised the minimum wage in 2016 and legalized recreational marijuana last year.

The minimum wage initiative also required employers to provide minimum amounts of paid leave, a provision challenged by the Arizona Chamber of Commerce and Industry and other business groups. They argued they were separate issues that should not have been in one initiative.

The Arizona Supreme Court rejected that argument, saying the “single subject” rule that applies to laws enacted by the Legislature does not apply to initiatives.

Republicans want voters to change that.

“It's unfair to the people who you ask to vote to have more than one subject matter,” Republican Rep. John Kavanagh told a Senate committee in March. Voters may to back a measure with issues they support though it contains other issues they don't, he said.

Locking in a single subject rule will make it harder for groups to get comprehensive initiatives like the minimum wage increase before voters and easier for courts to nitpick to kick them off, said Joel Edman, who leads the Arizona Advocacy Network.

“The trick is that what qualifies as a single subject is in the eye of the beholder,” he said.

Republican Rep. Tim Dunn is sponsoring another measure that would require initiatives to get 55% of the vote instead of a simple majority. He called the initiative process a “petri dish” for outside spending and said popular measures will still pass.

Hugo Polanco, a lobbyist for the progressive group Living United for Change in Arizona, told the Senate Government Committee in March that lawmakers were being hypocritical by wanting to require a supermajority for voter initiatives while they can pass legislation with a simple majority.

“This is clearly a power grab by the Legislature,” Polanco said.

Another measure approved by the Republican-controlled House on Friday and previously approved by the Senate would amend the Voter Protection Act, which was approved by voters in 1998 after lawmakers overturned a 1996 initiative legalizing medical marijuana.

The act prevents lawmakers from changing a law passed by initiative unless it both “furthers the purpose” and gets a three-fourths vote of the Legislature.

Lawmakers can directly refer any measure to the ballot for voters to consider with just a majority vote. Republicans have one-vote majorities in each chamber and put the Voter Protection Act measure on the ballot with no support from Democrats.