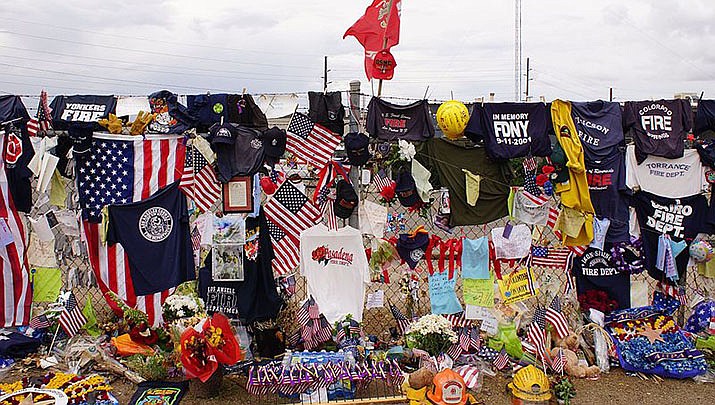 Flags on Arizona state buildings are being flown at half-staff today, the eighth anniversary of the death of 19 firefighters from the Granite Mountain Hotshots. A memorial to the firefighters is pictured in this 2013 file photo. (Photo by Chris English, cc-by-sa-3.0, https://bit.ly/3dvcH2u)

PHOENIX - Arizona Gov. Doug Ducey ordered flags on all state buildings to be flown at half-staff Wednesday to honor the heroism of 19 firefighters who died eight years ago battling a wildfire near Prescott.

All but one of the Granite Mountain Hotshots crew members died on June 30, 2013, while fighting the lightning-caused Yarnell Hill Fire.

A memorial state park was dedicated to the fallen firefighters in 2016 in the area of the wildfire.

In a statement, Ducey said the hotshots defended Arizona communities against the flames without hesitation and “their service remains among the greatest ever known to our state.”