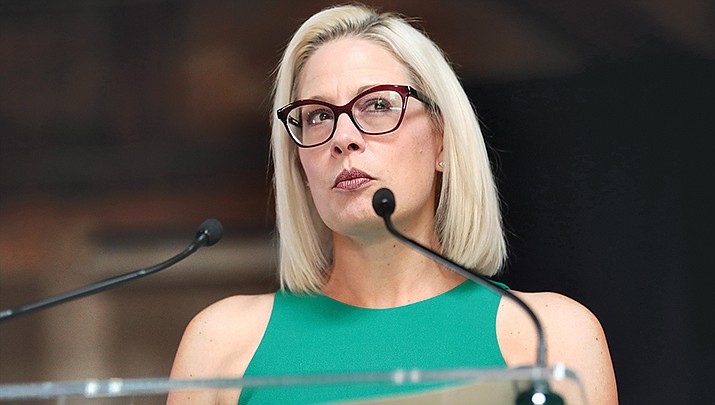 KINGMAN – The City of Kingman continues to work with the Arizona National Guard Cyber Joint Task Force in discovering the extent of the cyberattack on the city’s computer system that occurred Friday, Feb. 26, an issue that was addressed by U.S. Sen. Kyrsten Sinema (D-Arizona) at a recent Homeland Security and Governmental Affairs Committee hearing.

The city wrote in a news release that the task force has been onsite with the city’s Information Technology team since Saturday, Feb. 27, and is still working to discover the extent of the attack.

The city still doesn’t have access to email and can only work with customers by phone or in-person. Some operations can be completed manually, while others must wait to be completed until systems are back up. There does not exist a timeline for when systems will be fully functional at this time.

“As systems are brought back online, it will be done incrementally, therefore we are still asking for the community’s patience as we work to get back to fully-functioning levels,” the city wrote. “It will not happen overnight.”

Customers can pay utility bills in-person or over the phone, however, the city advised of long lines and hold times. The city is also waiving all delinquent notice fees at this time.

The cyberattack on Kingman was referenced by Sinema as she spoke at a recent Homeland Security and Governmental Affairs Committee hearing. She asked Gene Dodaro, comptroller general of the United States, how the federal government will continue to strengthen cybersecurity.

“The need to ensure our country’s cybersecurity was highlighted in Arizona, with the recent cyberattack against the computer systems for the City of Kingman,” she said. “This attack shows clearly the disruption and damage that cyber criminals can inflict on local communities.”

She said the cyberattack “lays bare the need for continued action.”

“Friday’s cyberattack against the computer systems for the City of Kingman highlights how pressing this need is form a local level. Federal, state, local and tribal entities need to take urgent actions to implement comprehensive cybersecurity strategies, perform effective oversight, secure their systems, and protect privacy and sensitive data of its people,” Sinema continued.

Dodaro said that as troubled as the federal government is in terms of its vulnerability, state and local sectors are potentially even more vulnerable and in need of assistance. Dodaro said the Cybersecurity & Infrastructure Security Agency was recently helpful in securing elections systems, and that he believes the state and local levels need more of that kind of assistance.