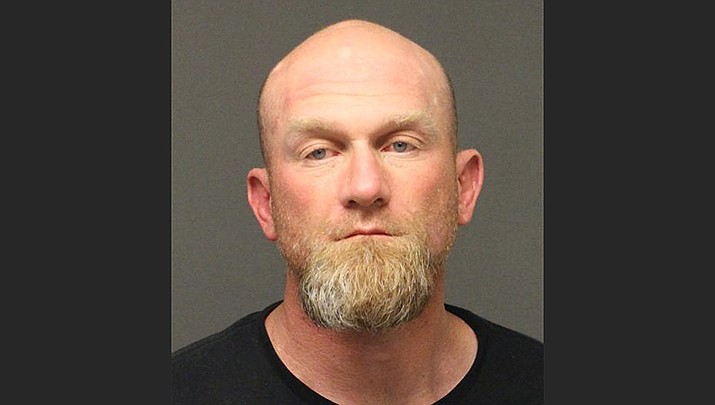 KINGMAN – Jason Allen Campbell, 39, of Kingman, has been arrested by the Mohave County Sheriff’s Office on a charge of attempted murder, among other felony allegations, stemming from two alleged incidents spanning Wednesday and Thursday, March 3-4.

MCSO wrote in a news release that detectives responded to the 2600 block of Potter Avenue at 9:39 p.m. Wednesday. Upon arrival, deputies observed an adult male victim with a gunshot wound to the chest.

The victim was transported to Kingman Regional Medical Center, and later taken by helicopter to a Las Vegas hospital where he is listed in critical condition. The suspect had fled the scene prior to law enforcement arrival.

During the investigation, the suspect in the shooting was identified as Campbell. Detectives and deputies began an extensive search of the area in an attempt to locate Campbell, who had reportedly fled in a vehicle.

At approximately 2:21 a.m. Thursday, law enforcement received information indicating Campbell was at a residence in the 2200 block of Leroy Avenue. Detectives and deputies responded to the residence, where Campbell was allegedly found to be threatening the two occupants.

According to law enforcement, Campbell fired at one of the victims, striking them in the arm. The round went through the male victim’s arm and lodged in the leg. Campbell is reported to have fled the residence, resulting in a foot pursuit.

Campbell was taken into custody and still in possession of the firearm at the time of his arrest, the sheriff’s office wrote. He was also reportedly found to be in possession of a usable quantity of methamphetamine. The second victim was transported to Kingman Regional Medical Center where he is listed in stable condition.

Campbell was booked into the Mohave County Adult Detention Facility on suspicion of attempted murder, two counts of aggravated assault and possession of dangerous drugs, all felonies. The investigation continues.