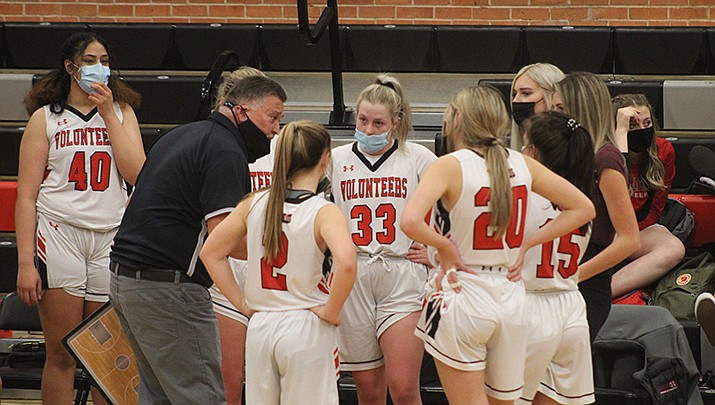 The Lady Volunteers fell behind 15-2 after one quarter and never fully recovered, losing 47-37 to host Coconino on Wednesday, March 3.

After a half-time talk the Lady Vols spread the floor on offense and got more stops on defense, allowing them to get back into the game, trailing 33-29 after three periods after back-to-back three-pointers from seniors Lia Lucero and LaNae Burgess.

Forced to foul in the fourth quarter, the Lady Vols watched as Coconino, ranked 9th in the state in 4A, buried seven timely foul shots to put the game away.

“I am very proud of the way our team continues to fight, especially on the defensive end. However, you can’t spot a top 10 team 15 points before you start to play,” Lady Volunteers head coach Jerry Arave said, noting his team needs to be more aggressive on offense at the beginning of games.

The Lady Volunteers, ranked 19th in the state in 4A, slipped to 8-5 with two games remaining. They could still make the 16-team state playoff field with wins at Flagstaff on Thursday, March 4, and at home against Prescott on Friday, March 5.

The Volunteers (5-9) play their season finale at 7 p.m. Friday, March 5 in Prescott.

KINGMAN – On a cold, wet and windy night, Lee Williams couldn’t contain a red-hot Prescott High School boys soccer team, falling 4-1 to the second-ranked 4A team in the state.

Prescott improved to 10-0, while the Volunteers, ranked 14th in the state, slipped to 7-4.

The top 16 teams in 4A qualify for the state playoffs.