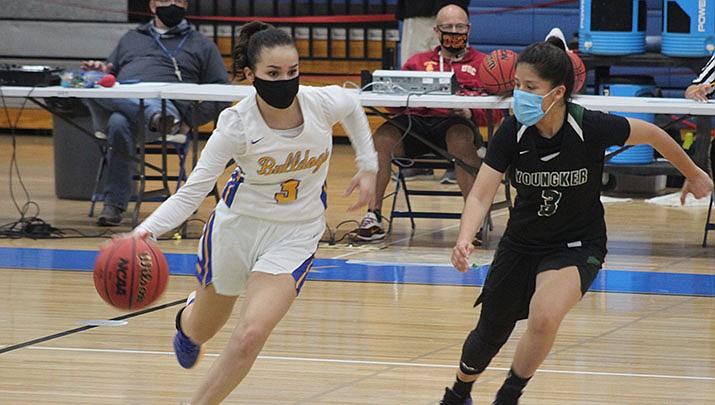 KINGMAN – The Kingman High School girls basketball team ended its season on a positive note with a 51-44 win over visiting Tonopah Valley on Thursday, March 4.

Kingman finished the season with a 4-7 record and a 19th-place ranking in Class 3A. Tonopah Valley was winless at 0-16.

FLAGSTAFF – The Lee Williams High School girls basketball team gave 6th-ranked Flagstaff some stiff competition, but came up on the short end of a 50-43 score on Thursday, March 4. The Eagles had beaten Lee Williams by 25 points on Feb. 22.

With the loss, the 20th-ranked Lady Volunteers likely lost out on a playoff spot.

Lee Williams hosts 34th-ranked Prescott (3-12) in their final regular season game on Friday, March 5, and is unlikely to make the 16-team Class 4A state playoff field even with a win.

The Volunteers slipped to 5-10 on the season with the loss. They travel to Prescott for a 7 p.m. tipoff in their season finale on Friday, March 5.

Flagstaff, the 18th-ranked team in Class 4A in the state, improved to 9-9 with the win.

The Bulldogs finished the year winless at 0-12. Tonopah Valley closed the season at 9-7.