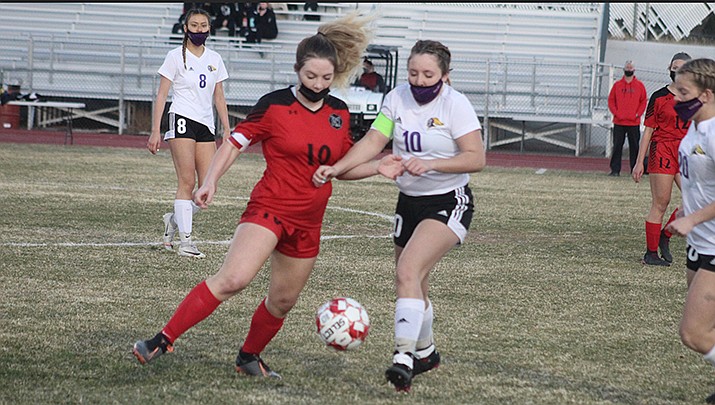 EL MIRAGE – The Lee Williams High School girls soccer team will carry some momentum into the Class 4A state playoffs, after a 2-1 win over host Dysart on Friday, March 5.

The Volunteers came from behind to win, tying the game when freshman Berlin Bratley scored her first varsity goal on a 25-yard direct kick to the upper left corner. Sophomore Grace Otero got the gamewinner, burying a penalty kick in the right corner of the net.

Ninth-ranked Lee Williams will play at No. 8 Seton Catholic High School (9-2) in the opening round of the playoffs at 6 p.m. Wednesday, March 10.

KINGMAN – Lee Williams beat Prescott 50-35, but couldn’t move up far enough in the rankings to make the state Class 4A playoffs.

Senior Lia Lucero poured in 15 points in the second half and 26 points on the night, including five three-pointers, to lead the Lady Vols.

“We knew Lia Lucero had something going so I told her she had the green light to shoot whenever she felt good about it,” Lady Volunteers coach Jerry Arave said. “The other players felt it, too, and were more than happy to get her the ball.”

Sophomore forward Becca Arave added 10 points for Lee Williams, which finished the season with a 9-6 record and a No. 18 ranking in the state in Class 4A.

Kingman Academy finished the season with an 8-8 record and a No. 17 ranking in the state.

Scottsdale Prep improved to 9-8 and faces top-ranked Pima (16-1) in the opening round of the playoffs.

The Volunteers finished the season with a 5-11 record. Prescott, ranked 13th in the state in Class 4A, improved to 10-6.