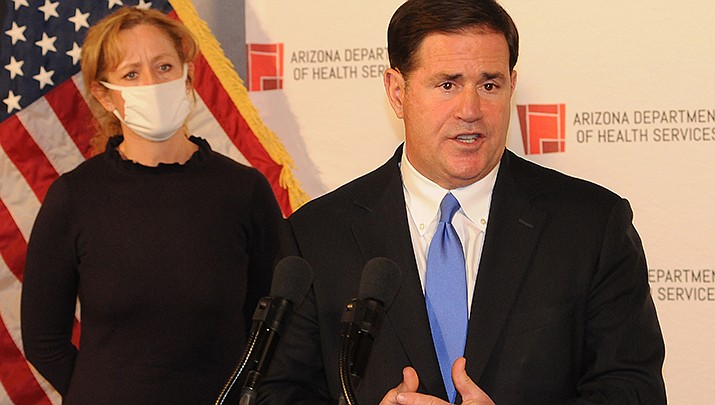 The Arizona Senate voted to raise the state’s unemployment benefits from the current $240 per week to $320 per week. Arizona Gov. Doug Ducey is shown. (File photo by Howard Fischer/For the Miner)

PHOENIX – The Arizona Senate voted Thursday to raise Arizona’s super-low $240 maximum weekly unemployment benefit to $320, just over two weeks after the House passed a competing version raising the pay to $300 a week.

Republican Senate President Karen Fann's proposal passed on a bipartisan 25-4 vote. The few GOP opponents raised several reasons for opposing the measure, including the need for reform at the agency overseeing unemployment and finding a way to boost incentives for people to return to work. One of them said she was concerned about raising employer premiums.

“It's a timing issue,” GOP Sen. Sine Kerr said. “I still have businesses in my district that are hurting and need to recover.”

The major differences in the two proposals are that Fann’s plan cuts benefits from 26 to 22 weeks when unemployment is low and contains a second pay raise to $400 when the state's depleted unemployment trust fund is again at normal levels.

Her proposal, SB1411, would raise average yearly per-employee premiums paid by employers from $160 a year to $182 a year. Once the state's depleted unemployment trust fund is back to normal levels, unemployment pay would rise to $400 a week, and premiums would go up to $203 a year in 2023.

The proposal Fann announced last month also cut the number of weeks a person is eligible to 20 from 26 when the state unemployment rate is below 6%. But in a deal she made to get Democratic support, she raised that to 22 weeks on Thursday.

The House proposal from Republican Rep. David Cook, HB2805, passed on a 50-9 vote and is being considered in the Senate. His proposal raises pay in January and raises employer premiums just once because the weekly pay does not rise a second time. It does not cut the maximum number of benefit weeks.

Usually such dueling proposals end with some kind of deal being struck.

Both measures will allow laid-off workers to take more part-time work without losing their benefits. Arizona currently allows workers to earn only $30 a week before benefits are reduced. That amount would rise to $160 under both proposals.

Fann said raising that “disregard” amount keeps people in the workforce and gives employers the ability to keep workers on the job part time so when business improves they're available. “I firmly believe that it’s just like when kids drop out of school,” Fann told fellow senators. “Once they drop out, its hard to get them back.”

Arizona currently has the second-lowest unemployment pay in the nation, with only Mississippi paying less. Fann said after the second pay raise to $400 a week, Arizona will be 38th in the nation.

“The unemployment rate has not been raised in Arizona for 17 years,” Fann said. “We saw the direct effect of this during COVID and the effect it (had) on trying to give people just the ability to pay their bills and keep the lights on.”

Arizona’s unemployment soared after layoffs triggered by the pandemic last March. The trust fund, which builds up cash during periods of low unemployment, was at $1.1 billion before the pandemic hit a year ago.

Last month, it was below $90 million, although Republican Gov. Doug Ducey plans to use $134 million in federal virus relief funds to boost that balance.