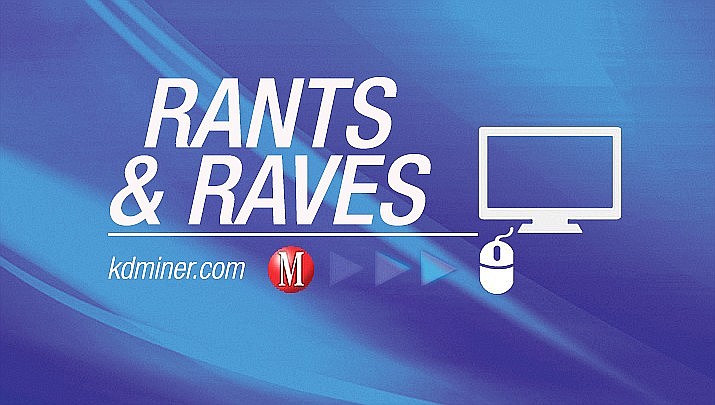 Effort to recall Mohave County Supervisor Bishop fails – God bless Jean Bishop, who served the public, with our safety foremost in mind, not herself and right-wing ideologies. She knew, and spoke, the truth. For that, she has been demonized, criticized and threatened by ungrateful extremists.

Miles to face recall election – Lest we forget, Mayor Miles was subject to a recall based on the extension of her mask mandate decision, which was arbitrary, unscientific and damaging to local businesses. It was also a violation of our constitutional rights.

Miles to face recall election – The money Mr. Coffman has wasted with his recall election could have paid for enhanced cybersecurity for the City of Kingman. People like Coffman should be less wasteful with our taxpayer dollars.

Miles to face recall election – The $65,000- $75,000 wasted on recall election could have been spent on law enforcement to curtail the meth epidemic and close drug houses in Kingman.

Andy Worth letter: Fake news – Thank you, Andy! The real fake news is all the conspiracy theories and suggestions that someone is taking your freedoms by trying to save lives! Get a grip, people. How gullible can you be?

Robert Churchill letter: I’m with Miles – Me, too! I stand with Jen Miles, and science and common sense! God bless her for respecting and trying to protect the lives of residents. Those against her display a shameless and callous disregard for the lives of others.

Robert Churchill letter: I’m with Miles – Thank you, Robert. The majority of Kingman people are friendly, civil and helpful, and we must try to forgive those who aren’t. They will have to answer someday.

Dick Polman column: We’re illiterate about our own democracy – Great column and truer words have never been spoken! Stop believing these con artists lying to you to further their own ambitions. Do some independent reading and thinking!

Biden’s dog Major injures Secret Service agent – For Pete’s sake, the Oval Office is no place for two huge German shepherd dogs. Are they kidding? The usual stupidity and lack of caring about others or the beautiful and expensively decorated Oval Office. Hey Joe, they’re temporary digs.

2 more COVID-19 deaths recorded in Kingman – Two more dead, and another in the next day’s report, but a local Republican club entertains a speaker urging people to do the very thing that continues to proliferate the spread, hence, the deaths and suffering from this virus.

Busloads of asylum seekers arriving in Tucson – So, Americans are supposed to stay put and mask up while our fearless leader opens the border with no regard that we are in the middle of a pandemic. Something is so wrong with this picture.

UK royals absorb shock of revealing Harry, Meghan interview – Cry me a river, OR take the money and run. Markle was fully aware of royal duties and her role and chose the money, going on massive spending sprees. She knew the rules and thought she could flaunt them. NOT.

Defying rules, anti-vaccine accounts thrive on social media – The vaccine is safe; no one has died from it. More than 525,000 Americans HAVE died from COVID-19. Social media has many unreliable, nefarious posts, including Russian misinformation. Don’t be fooled. Take the vaccine.

When to expect COVID payments – Not worried about payments; worried about my children and grandchildren left with this insane debt of $1.9 trillion, only part of which is even remotely for COVID-related problems. Unbelievable the gall of liberals.

Arizona Senate approves ID with mailed ballot – More voter suppression! One would think they fear they can’t win when everyone gets to vote.