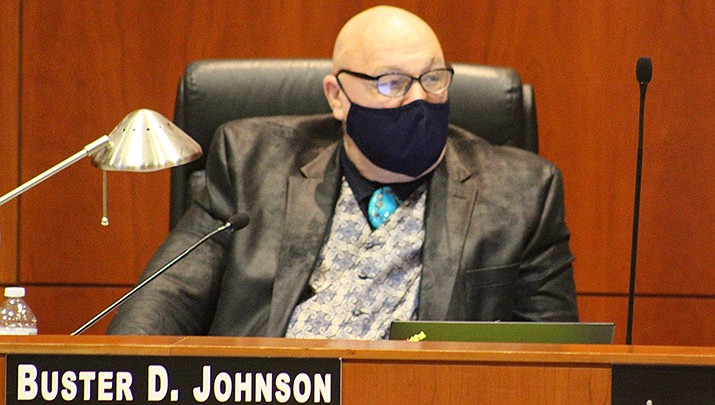 Mohave County and the City of Kingman are set to receive funds as part of a coronavirus relief set to go to Arizona communities. Buster Johnson is pictured from a Feb. 16 meeting. (Miner file photo)

KINGMAN – Mohave County and the City of Kingman are set to receive $41 million and $7.4 million, respectively, as part of the more than $2.6 billion in coronavirus relief set to go to Arizona communities. But some local elected officials are more excited about the money than others.

County Manager Sam Elters said on behalf of the board of supervisors that Mohave County is “grateful to receive the funding.”

He confirmed that is it not decided how the funds will be used.

“There are four criteria provided along,” he said. “But truly, we are still waiting for guidance and details.”

Elters offered that he knows that half of the money will be transferred to the county within the next 60 days. The other half is to be received no sooner than a year from now. The relief package has to be spent by the end of 2024.

County staff had a phone call with the Arizona County Supervisors Association staff on Friday, March 12 regarding the matter. It is waiting for the county board of supervisors’ guidance, as well as directions from the U.S. Department of Treasury, Elters said, later adding that the “discussion is still young.”

“Clearly, there will be some discretion,” Elters said about the flexibility that comes with the money.

He mentioned that there are some “high level” directions linked to this legislation and the county must be in compliance with the original designation of the funds.

Supervisor Hildy Angius of District 2, at a Monday, March 15 meeting, spoke to the freedom the county will have in choosing how to use the money.

“The most interesting thing is that it can be used for basically anything; anything but lobbying,” she said. “That means for people, for citizens, for the county. We have a lot of talking to do.”

“It’s ridiculous that the federal government is giving so much money to small governments,” he told the Miner on Friday, March 12, a day after U.S. Sen. Kyrsten Sinema (D-Arizona) issued a news release stating Arizona cities, towns, counties and tribal communities will receive over $2.6 billion in critical coronavirus relief. “It’s a waste of money,” Johnson said.

Mohave County will receive over $41 million. It’s not clear what will be done with the money and there is some flexibility in terms of its usage.

“That will be for the board to decide,” Johnson said. “There are some strings attached to that money. ... If that was up to me, I would like to expand county services.”

While the funds might be “ridiculous,” they are not likely to be sent back to Washington, D.C.

“That’s always a good question,” Johnson said. ““But it will not do any good to send it back.”

Johnson said if the county would send the money back, someone else would take it. With accepting the money, the county can at least make sure that money will benefit county taxpayers, he added.

Kingman Mayor Jen Miles thanked the senator for her efforts in delivering the relief package, noting support for the health care system, schools, veterans, seniors and essential services. Miles said in the news release that the Restaurant Relief Plan will benefit Kingman’s tourism sector, and that measures targeting broadband and transportation will contribute to economic recovery.

Miles also outlined the city’s plans for the money.

“With respect to how the city will use the funds that we received, which I believe is about $7.4 million, it will be used to provide services and address priority issues associated with pandemic recovery,” the mayor said. “They will be decisions made by the council as part of budget discussions.”