KHS pitcher Coleton Padilla signs with College of the Siskiyous 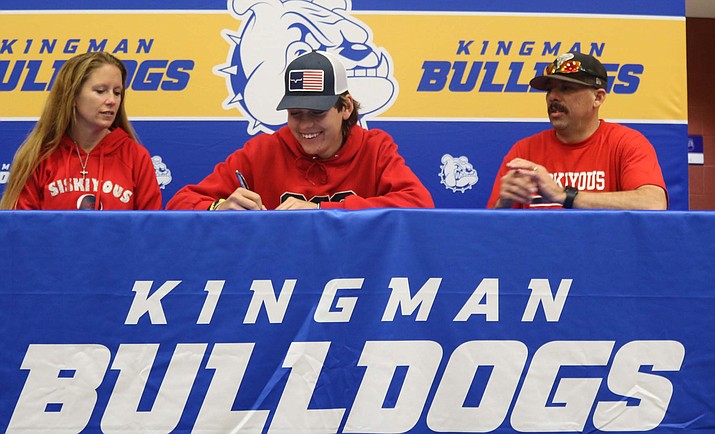 Coleton Padilla of Kingman High School has signed a national letter of intent to play college baseball at the College of the Siskiyous in Northern California. (Photo by Travis Rains/Kingman Miner)

KINGMAN – Kingman High School’s Coleton Padilla has signed to pitch at the College of the Siskiyous in Weed, California, and hopes to see some of his current teammates at the next level when their time comes.

Padilla has been pitching “for a very long time,” but it was a general love for all things baseball that got him started in the sport.

“Pitching kind of came, but baseball has been in the family,” Padilla said. “So I kind of just was born into it, but I’ve loved it ever since I started, so I just kept playing.”

Padilla says he loves everything about baseball from his teammates to traveling. And he loves the fact that he will be taking his talents to the next level.

“It’s a very good feeling,” he said. “I’ve dreamed of going to college to play baseball for quite a while now.”

Padilla is excited for the competition at the next level, as well as for the experience as a whole, saying “I’m really excited to see what it’s like.”

And he’s looking forward to improving his game while at the collegiate level with a focus on getting a little bigger and throwing a little harder. In fact, he’s already started thanks to his own motivation and the support of his coaches, with the pitcher thanking coaches Chad Baitinger and Chris Chavez. He also thanked his coach and father, Steve Padilla “for being the motivation that I need to keep pushing.”

“He’s always been there to push me, to get me to accomplish my goals,” Padilla said of his father.

Padilla is going to miss his teammates, many of whom he said are a year younger than he is.

“Playing with friends, mostly, because a lot of them are younger than me so I’m moving on from the high school level and they get one more year down here,” he said when asked what he will miss. “So just leaving them this year, hoping they have a good season next year and maybe seeing them in the next level.”

His advice for his teammates?

“Don’t quit and don’t let the negative energy from other people get to you; just push through it,” he said.

Padilla plans to study physical therapy in college, with the hopes of turning his degree into a job as a trainer or physical therapist for a collegiate or professional sports team.