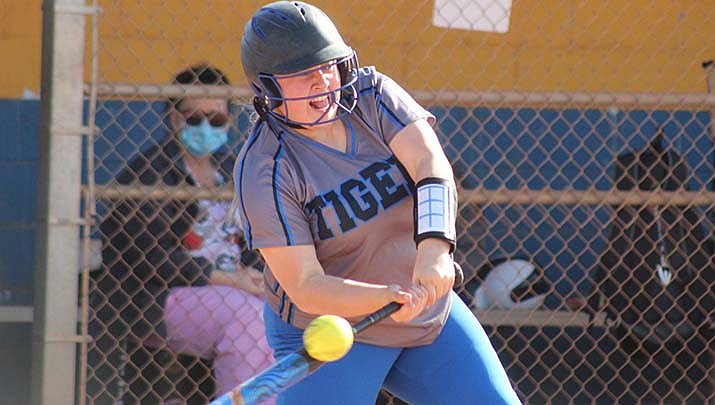 Lady Tiger pitchers Mezi Sena, a freshman, and junior Ammerisa Benson combined on a two-hitter in a game that lasted just 3 ½ innings due to the mercy rule.

The Lady Tigers batted around the order in each inning.

Benson went 4-for-4 at the plate with a double and scored four runs to lead Academy on offense, while senior Kiley Holloway drove in four runs with three hits, including a double.

Bradshaw Mountain improved to 2-1 on the year.

He got plenty of support, as the Tigers racked up nine hits.

Kingman Academy broke open a 5-3 game by plating eight runs in the bottom of the fifth inning to bring the 10-run mercy rule into effect.

The Tigers improved to 1-2 with the win. They travel to River Valley on Tuesday, March 30 for a rematch with the Dust Devils, who beat Academy 12-1 on March 23.

St. John Paul slipped to 0-5 on the campaign.

Amazingly, Lee Williams lost just 11 games – four in doubles and seven in singles – en route to the win. They improved to 4-0 overall, and host Mingus Union at Centennial Park at 3:30 p.m. Monday, March 29.

Tempe slipped to 1-4 for the season.

KINGMAN – The Kingman High School girls tennis team evened its record at 1-1 with a 6-3 win over Northland Prep on Thursday, March 25.

The No. 1 and No. 2 singles players led the way for the Lady Bulldogs, who took four of seven contested matches.

Other Kingman winners included Jasmine Sipe at No. 6 singles by forfeit, and the doubles team of sophomore Genevieve Foster and freshman Victoria Monzillo by forfeit.

TEMPE – The Lee Williams High School boys tennis team made the long trip to Tempe worthwhile on Thursday, March 25, returning home with a 7-2 victory to improve to 3-0 on the season.

The Volunteers dominated in both singles and doubles play.

The Volunteers will put their undefeated record on the line at Mingus Union at 3:30 p.m. Monday, March 29.

Tempe slipped to 2-3 on the season with the loss.

Kingman Academy, which amassed 47 points in its fourth-place finish, had two athletes with a pair of high finishes.

Sophomore Jayden Kile was the highest finisher for Kingman Academy, finishing second in the shot put with a toss of 31-06.