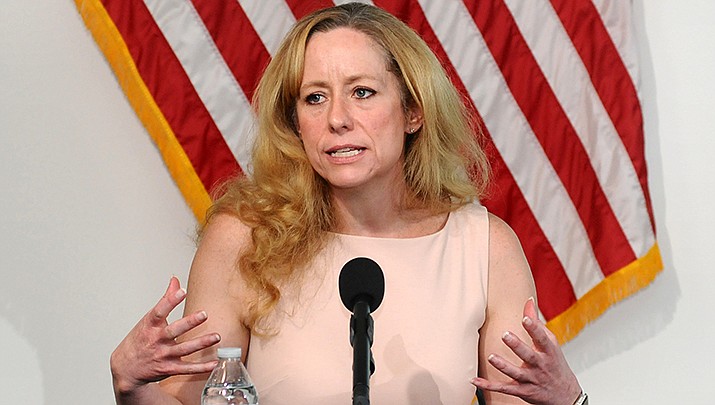 The death toll from the coronavirus is nearing 17,000 in Arizona. State Health Director Dr. Cara Christ is shown. (File photo by Howard Fischer/For the Miner)

PHOENIX - Arizona’s death roll from the coronavirus outbreak is approaching 17,000.

The state on Tuesday reported 586 additional confirmed COVID-19 cases and 23 more deaths, increasing the pandemic totals to 841,078 cases and 16,941 deaths. According to federal Centers for Disease Control and Prevention data, Arizona’s death roll ranks 13th among the states by total deaths but sixth among the states by deaths per 100,000 population.

COVID-related hospitalizations dropped to 549 as of Monday, far below the Jan. 11 pandemic record of 5,082, according to the state’s pandemic dashboard. Nearly 2.1 million people, 29.1% of the state’s population, have received at least one dose, and nearly 1.3 million are fully vaccinated, the dashboard stated.

Seven-day rolling averages of daily new cases and daily deaths declined over the past two weeks, according to Johns Hopkins University data.

No tuition hike for residents

PHOENIX - The Arizona Board of Regents says tuition proposals by the presidents of the three state universities for the 2021-2022 academic year don't include increases for undergraduate students who are Arizona residents.

Regents President Larry Penley said Friday the stance taken by the university presidents reflects a commitment to ensuring that education is affordable despite the financial hardships placed on many students by the pandemic.