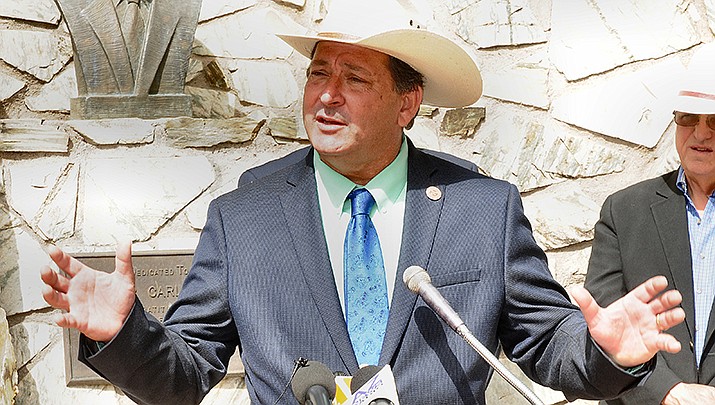 Arizona Rep. David Cook (R-Globe) is proposing increasing the expense per diem for state lawmakers who live outside Maricopa County to $193. (Photo by Howard Fischer/For the Miner)

PHOENIX – State lawmakers are moving to more than triple their expense allowance.

But unlike prior bids, this time the plan would provide more cash only for the nearly half of legislators who don't live near enough to the state Capitol to drive there daily and have to find lodging during the session. And that may help avoid a gubernatorial veto.

The proposal by Rep. David Cook, R-Globe, would tie the reimbursement for out-county legislators to the rate the General Services Administration allows for federal employees. That rate, based on location and time of year, is $193 a night for Phoenix during the winter for lodging, including $151 for lodging and the balance for meals and incidentals.

Compare that to the $60 a night now permitted under state law for what is supposed to be a 100-day session each year.

But Cook said it's even worse than that.

He pointed out that legislators who live in Maricopa County get $35 a day just to drive to and from their own homes and for their incidental expenses, whatever they are.

"These guys get to go home and have dinner every night at their house,” he said.

But that's not an option for a legislator from Tucson or Lake Havasu City, or Globe.

"So where would I stay on 25 bucks?” he asked, the differential between in-county and out-county allowances. And that doesn't even count the cost of food.

HB 2053, to be considered Wednesday in the Senate Appropriations Committee, could get resistance from some Maricopa County lawmakers who insist they, too, are entitled to more money even if they don't have lodging expenses. The last adjustment was in 1984.

But adding them into the mix could doom the entire measure.

That's just what happened two years ago when lawmakers tried to set the out-county per diem at $190 – and $92.50 for in-county legislators. It was vetoed by Gov. Doug Ducey.

In his veto message, the governor said he had no problem with the raise for the lawmakers from the other 14 counties.

"Arizona is the sixth largest state in terms of land area,” Ducey wrote. "So for rural legislators and those representing areas outside of Maricopa County, there is a strong case to be made for ensuring we are appropriately recognizing what is required for them to be here at the state Capitol in Phoenix during session.”

But the governor made it clear he was not interested in boosting the daily allowance collected by lawmakers who live in Maricopa County, the ones who can go home every night and have no need for local lodging.

Cook said the distinction is fair.

"All things being equal, these people have to come down, find a place to live, rent a place or get a hotel room or whatever, and it still doesn't cover the cost of doing that stuff,” he said. "In other words, I guess you've got to be independently wealthy or in business or something, or have an (outside) income you spend to come down here and do this.”

And that, Cook said, can mean that the Legislature is not reflective of Arizona as a whole – or the districts from which they come.

"We don't have the ability to have, really, someone come down and represent those districts,” he said.

In his own case, Cook said he's "fortunate.”

He said in the 1950s his in-laws bought a home in Mesa. When they didn't need it, it went to his brother-in-law. And eventually Cook and his wife bought it from them.

That provides him a place to stay during the session – and a place to cook meals – without needing a hotel and without having to go to restaurants.

Without that, Cook said, he would be faced with a choice: Make the daily drive from Globe or spend the money to find local accommodations. And that, he said, is the choice that many rural lawmakers now have.

There is another option: Pay all legislators from all counties more than the $24,000 a year they now get.

That, however, is beyond their control: Legislative pay can be adjusted only if voters approve.