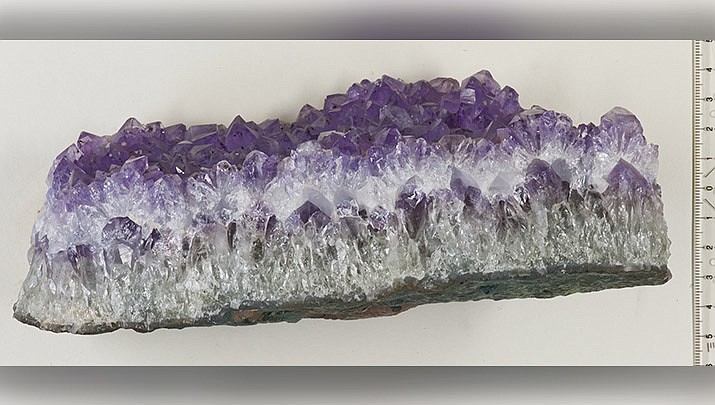 This specimen of amethyst, a form of quartz, is from Minas Gerais in Brazil. (Photo by Hannes Grobe, cc-by-sa-3.0, https://bit.ly/3t6nh4T)

Most people are familiar with quartz. It’s easily identified by its glassy white or clear look, and hardness (can’t be scratched by a knife). It’s great for polishing and it’s almost everywhere. But the mineral has many different looks. Rock people have given the different types and appearances of quartz names that confuse the uninitiated. Quartz (silicon dioxide, SiO2) can mix with a large number of impurities that give it different colors and make it look like a different mineral. The fine-grained variety is called chalcedony (Cal-sed- knee or Cal-se-doe-knee) and can be found weathering out of volcanic rocks in the Black Mountains. Many times, chalcedony occurs in twisted forms that look like a rose so it gets the name of desert rose, not to be confused with the mineral barite that also forms rose-like masses.

Amethyst is quartz with a purple color due to iron impurities. If it’s radiated by naturally occurring uranium, it turns a beautiful deep purple. This unique color has caused people to think it has healing powers, giving the wearer enhanced physical vitality. It supposedly strengthens the adrenal gland, the reproductive organs and the heart. Not sure about the medicinal properties but I do know that there is an amethyst mine on the slopes of Four Peaks mountain near Phoenix. The slopes are so steep that they use helicopters to reach the area and transport the crystals. The largest amethyst crystals are from Brazil where they occur in geodes.

Fine-grained quartz that has bands or swirls of different colors is called agate. Gem-stoners like agate because it’s easy to find and polishes to a great-looking stone to make jewelry. Other names for quartz with impurities are jasper (silica and iron oxide), rutilated quartz, tiger eye and smoky quartz, among many others.

To a mineral exploration geologist, the part we like about quartz is that many times it’s associated with gold. But not just any quartz. It has to have certain characteristics, depending on the type of gold deposit being looked for. The gold deposits found near Oatman in the Black Mountains are called low sulfidation-volcanic hosted epithermal – fancy words for not much pyrite – in volcanic rocks-made from low-temperature fluids. Not sure why many professions use fancy words to say the same thing we can say with common words, and geology isn’t exempt from that habit.

On old Route 66 near Sitgreaves Pass on the way to Oatman there’s an excellent outcrop of what a low-sulfidation-volcanic hosted-epithermal vein looks like. A short way down from the top on the west side of the pass is a fenced-off area where a stope of the Gold Road Mine reaches the surface. The vein is visible in the walls of the workings showing the banded nature of the quartz that is associated with this type of gold deposit. Generally, the white, clean, coarse-grained quartz visible in the Hualapais and Cerbats isn’t associated with gold. These types of quartz outcrops are referred to by prospectors as quartz blowouts. Good for decorative rock but not for gold.

Quartz outcrops associated with higher temperature mineral deposits, like those found in the Cerbats and Hualapais, are dirty looking, with lots of holes where the sulfides weathered out. There’s usually heavy staining by iron oxides like hematite and jarosite. This coloring is so pervasive that even the soil takes on the reddish color.

One of the most uncommon minerals are diamonds, with high-quality gems extremely rare. They are rare because of how they are formed. Contrary to the song, “… I’m just an old chunk of coal, but I will be a diamond someday …” by Billy Joe Shaver, diamonds are not made from coal. Diamonds are formed deep in the earth’s mantle where the pressure is great enough to compress carbon found in the mantle and turn it into diamonds.

If diamonds are formed so deep in the crust, how do they get to the surface? For some unknown reason, the pressure builds to a point that the mantle explodes in a deep-sourced volcanic eruption and sends material all the way to the surface in what is called a Kimberlite Pipe – a pipe-like feature that blew material to the surface. These pipes are found only in certain places on Earth with most diamond-bearing pipes in South Africa, Brazil and Canada. We have pipes in northeastern Arizona but they hold garnets, not diamonds. The best-known diamond-bearing pipe in the U.S. is in Arkansas’ Crater of Diamonds State Park. It’s open to the public and you can dig for diamonds and keep what you find. The largest has been the Uncle Sam at 40.23 carats.