Mop up continues on Flag Fire 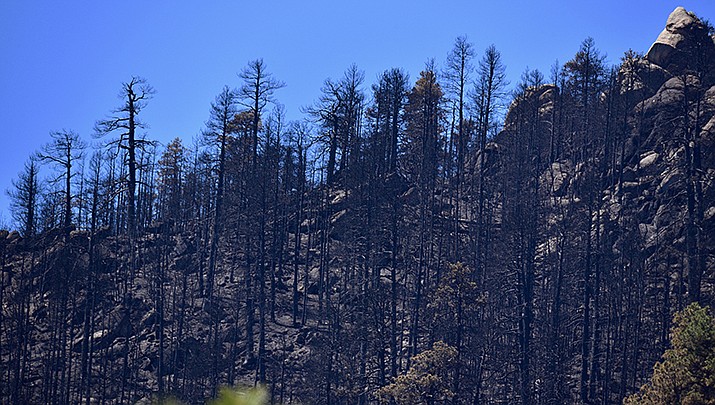 The Flag Fire, which forced the evacuation of the community of Pine Lake in the Hualapai Mountains, is now 88% contained. (Photo courtesy of Tim Hammond)

The Flag Fire began at approximately 2 p.m. Sunday, April 25 between the Flag Mine and Wild Cow Campground, with the cause still under investigation. However, investigators have used process of elimination to determine that the fire was human caused.

Approximately 200 homes in the Pine Lake community were evacuated Sunday, prior to residents receiving the all-clear to return to their homes on Friday, April 30. Hualapai Mountain Park, which was also closed Sunday, April 25, remains closed to visitors.

According to InciWeb, upcoming planned actions for fire crews include mop ups and monitoring threats to the line at the east side of the fire. To the south, patrols will be made both by air and ground.

Crews will continue to patrol the fire’s edge and assess conditions to the west, and mop up and secure the fire to the north.

Firefighters working the fire have been reduced to 60. A BLM Type 3 organization, which utilizes local resources, took over management of the fire from Southwest Area Incident Management Team 1 on Sunday, May 2.