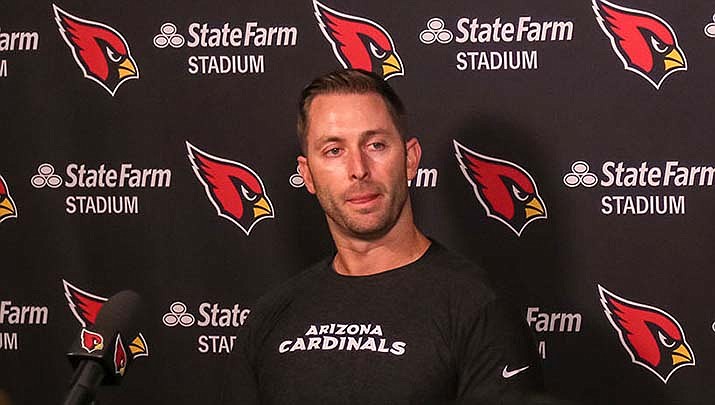 He also believes those guys can help from Day 1 in the desert. For a team that's built to win now, that's an important trait.

The Cardinals are trying to break a playoff drought that extends back to 2015. The franchise nearly made the postseason last year but finished a disappointing 8-8 after losing five of its last seven games.

“We knew we had to get better,” Kingsbury said Saturday. “None of us were pleased with how that thing ended last year. We wanted to improve through the draft and (general manager) Steve (Keim) made it crystal clear to the coaching staff and personnel department, that those first two picks needed to play, play early and play a lot.

“That was the mission and I feel good with where it's at.”

The Cardinals grabbed Collins with the No. 16 overall pick on Thursday and reeled in Moore at No. 49 on Friday. Arizona spent much of the later rounds filling out defensive depth, particularly in the secondary.

The Cardinals traded up to get Florida cornerback Marco Wilson in the fourth round and added Duke defensive end Victor Dimukeje and Central Florida cornerback Tay Gowan in the sixth. In the final round, they picked Cincinnati safety James Wiggins.

Only two of the team's seven selections were offensive players: Moore and Penn State center Michal Menet, who was picked with the team's final selection in the seventh round.

The Cardinals were busy in free agency before the draft in an effort to help their offense, adding seven-time Pro Bowl receiver A.J. Green and running back James Conner. They also traded for Oakland center Rodney Hudson.

Arizona still could use another playmaking threat at tight end, but generally, there aren't any huge holes.

“I feel fantastic about them,” Kingsbury said. “A.J. Green's been one of the most productive receivers in the league over his tenure in Cincinnati and we can't wait for him to get out here and get a fresh start with (quarterback) Kyler (Murray).”

Collins had one of the best reactions of the entire draft when he found out the Cardinals had selected him midway through the first round.

After his name was announced, the Tulsa linebacker put his head in his hands and slowly slid off his chair onto the floor. He eventually stood and shared an emotional hug with his mom, Haley.

Haley Collins had to take money out of her 401K just so her son could travel to showcase football camps in high school, so that the lightly recruited high school prospect could search for a Division I scholarship offer.

“I apologize to everyone for acting like a big baby up there,” Collins said Thursday. “I couldn’t help it.”

Arizona's general manager made it clear he appreciates a little brainpower in prospects, to go with NFL brawn.

The Cardinals used a few of their selections on players from highly regarded academic schools. Moore played at Purdue while Dimukeje played at Duke. Collins was his high school's valedictorian in the small town of Hominy, Oklahoma.

Keim said that football intelligence is even more important these days as the NFL still deals with some COVID-19 restrictions. With fewer meetings in person, it's nice to have young players who can pick up schemes quickly.

The Cardinals' fourth-round pick, Wilson, is best known for a less-than-ideal reason.

The Florida cornerback had one of 2020's college season lowlights when he was penalized for throwing LSU tight end Kole Taylor’s size 14 shoe following a third-down stop in the fourth quarter. LSU would have punted. Instead, the Tigers got a first down and moved into range for what proved to be the game-winning field goal.

All shoe-tossing jokes aside, it's obvious the Cardinals thought highly of Wilson.

Keim traded up into the fourth round to grab him with the 136th overall pick. Arizona acquired the Wilson pick and a sixth-round selection from Baltimore while sending the Ravens this year's fifth-round pick and next year's fourth-rounder.

Wilson should have an opportunity to earn early playing time. The Cardinals signed veteran Malcolm Butler in the offseason and also have promising youngster Byron Murphy Jr., who has played well during his first two seasons. But after that the roster is thin. Robert Alford returns but has missed the past two seasons because of injuries.

The Cardinals' draft was light on picks throughout the middle rounds. They didn't have a selection in either the third or fifth rounds.

But they have a good excuse. The third-round pick was sent to the Oakland Raiders in the deal that brought Hudson to Arizona. The other pick was initially a fourth-rounder and was sent to Houston last year as part of the deal that put elite receiver DeAndre Hopkins in a Cardinals uniform.