Sharing the Stage in Kingman: KHS, LWHS team up for upcoming musical 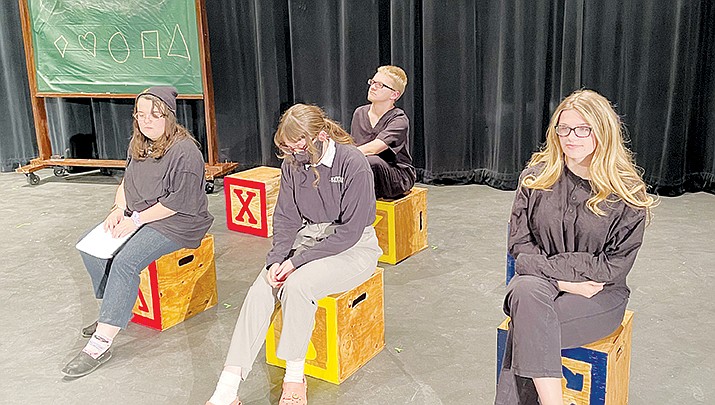 A cast of students from Kingman and Lee Williams high schools will present the musical “All I Really Need to Know I Learned in Kindergarten." (Courtesy photo)

“All I Really Need to Know I Learned in Kindergarten” may sound like a production geared toward children, however, the upcoming Kingman High School musical is actually targeted at an older audience with a theme of reminiscence of childhood and life lessons learned.

The production is set for Friday and Saturday, May 7-8 at the Kingman High School Theatre, 4182 N. Bank St. Show times are 6 p.m. Friday as well as Saturday, with another performance set for 2 p.m. Saturday. Tickets cost $5 at the door.

Kingman High School theater teacher Jennifer Rucker explained the production is a collection of series and songs, each with its own plot.

“It does have a theme, and the theme of the show is reminiscence of childhood and lessons we learned in life,” Rucker said. “It’s not necessarily targeted at youth, but at an older audience like parents and grandparents. It has a lot of stories and familiar anecdotes.”

On that note, Rucker added that the show does include some “minor profanity.”

“It’s a very reflective piece and I like it because it gives the opportunity for us to be grateful and happy and upbeat and reflecting on the positives and the negatives even in trying times,” Rucker continued.

While the production will take place at KHS, it will actually be the first joint production between KHS and Lee Williams High School in a number of years.

An effort was made to put on a joint production last year but the pandemic got in the way.

“So this is our first joint production in at least five or six years,” Rucker said. “Most of our leads are actually from Lee Williams, the senior class. And we obviously have plenty of kids from KHS. Most of our kids are newer in the KHS program, but they’re working together to create this piece.”

It’s not just the students of both high schools working together, but the theater departments as well. Rucker called the effort a “blended community show where we’re working together to put something on.”

All songs will feature six lead vocalists from Lee Williams and three from Kingman High School, and each song will feature soloists.

The musical was chosen as it allows rehearsals to occur with smaller groups as opposed to an entire cast. That allows for decreased group sizes and increased social distancing in observance of COVID-19 guidelines.

Seating is limited to 250 and every other row will be sectioned off because of the COVID-19 pandemic. There is no mask requirement to attend, but individuals are welcome to wear them. Light refreshments will be available for purchase during intermissions.

“If they come see the show they’re going to leave with some thoughtful reflections and some intense emotions,” Rucker said. “It’s not just you watching; you’re a part of something. The audience is the most important part of the show, and without them, we can’t do anything.”