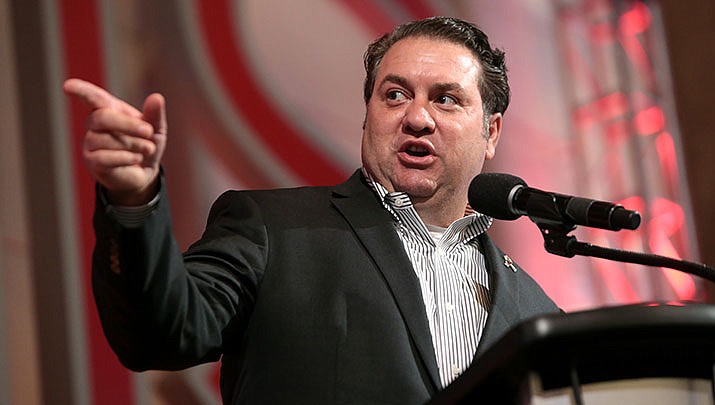 Jim Lamon, a solar energy executive, became on Monday, May 3 the first Republican to file to run against Democratic U.S. Senator Mark Kelly in 2022. Several other candidates, including state Attorney General Mark Brnovich, shown above, are also expected to enter the fray. (File photo by Howard Fischer/For the Miner)

Lamon, who has never run for office and is not well-known to voters, released a video introducing himself as a Washington outsider and successful businessman.

He's entering what could be a crowded field of Republicans seeking the GOP nomination in one of the highest-profile 2022 U.S. Senate races.

“I have strong principled conservative positions that as a military veteran, as a job creator, I understand business,” Lamon told The Associated Press. “I understand how to compete globally. I am very much into a level playing field for our American workers.”

Lamon described growing up on a farm in Alabama and joining the ROTC to pay for college. He was stationed in Germany as an Army officer during the Cold War. He went on to work in the energy industry, first in coal and gas before turning to solar.

Lamon founded DepCom Power, a Scottsdale-based firm that engineers and builds utility-scale solar plants. He stepped down as CEO to focus on his Senate run but remains chairman.

He said he plans to draw heavily on his experience as a Republican working in the solar power field and has made a conservative case in favor of renewable energy.

Other Republicans considering a Senate run include U.S. Rep. Andy Biggs, Attorney General Mark Brnovich, and retired Maj. Gen. Michael McGuire, the former head of the Arizona National Guard. The winner will face Kelly, one of the most successful Democrats in memory in Arizona, who won by 2.4 percentage points last year despite Arizona’s history as a Republican stronghold.

Kelly, a retired astronaut, is finishing the late John McCain's last Senate term and is running for a full six-year term in 2022.

Lamon said he plans to run with a combination of his own fortune and contributions from donors. He said his own contribution totals “seven digits.”

Kelly was one of the most prolific fundraisers in the country in 2020 and raised $4.4 million during the first quarter of 2021, a big sum this far out from an election.

Lamon was one of Trump’s 11 presidential electors in Arizona and would have represented the state in the Electoral College if Trump hadn’t lost to Democrat Joe Biden.

After the election, Lamon and the 10 other electors sued alleging Arizona election systems have security flaws that let election workers and foreign countries manipulate results and that those systems switched votes from Trump to Biden. The case was dismissed for failing to provide evidence to back up its claims.

Lamon spoke favorably of an ongoing hand recount of votes and review of voting equipment in Maricopa County on behalf of the state Senate. The work is being overseen by a cybersecurity consultant who has cast doubt on the legitimacy of Biden's victory, but Lamon said he has confidence in former Secretary of State Ken Bennett, a Republican who is serving as a liaison between the Senate and its consultant, Cyber Ninjas.

“I will honor the result either way,” Lamon said. “But I just believe there is too many people with too many questions that it is not that difficult for us as a nation to heal that wound and find out.”