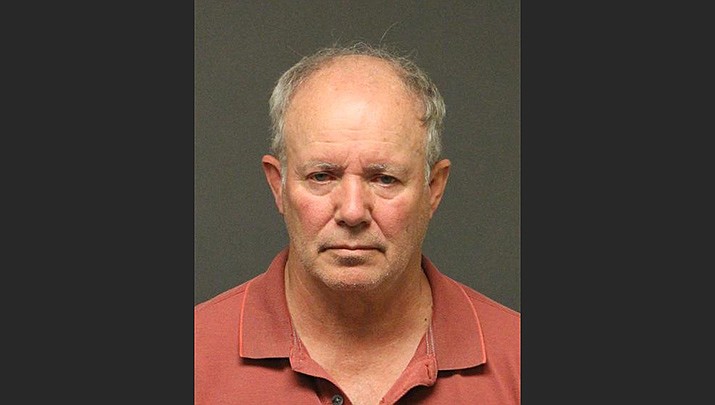 KINGMAN – Local political activist and former Mohave County Republican precinct committeeman Steven Robinson was arrested by the Kingman Police Department on suspicion of driving under the influence to the slightest degree the evening of Thursday, May 6.

According to KPD, Robinson was pulled over just prior to 11 p.m. Thursday. While en route to a reported possible physical altercation, a KPD officer was advised by dispatch that one of subjects involved had left in a black Ford Expedition bearing Utah registration. As the officer was passing the 1700 block of Hillcrest Drive, he reportedly observed a black Ford Expedition pass him heading east. After turning around, the officer said he confirmed that the vehicle had Utah registration.

The officer activated his emergency lights in the 3700 block of Stockton Hill Road, bringing the Expedition to a stop. According to KPD, the driver and sole occupant of the vehicle was identified as Robinson. The officer told Robinson that he was pulled over in reference to the possible altercation.

Robinson reportedly told the officer that he lives at the residence in question with this brother, and that while watching TV in the living room, he began yelling because “he did not agree with what a liberal was saying.” Robinson and his brother reportedly exchanged words when the latter yelled at the former, after which time Robinson went to his bedroom. Robinson told the officer that his brother had called 911 and lied about what had happened. Robinson also said he decided to leave and get a hotel room, and that he drank one margarita that night, according to law enforcement.

The officer wrote in his report that he detected the odor commonly associated with that of an alcoholic beverage coming from Robinson’s breath during their conversation. The officer also reported that Robinson’s face was flushed, his eyes bloodshot and watery, and that his balance appeared slightly off when walking.

Another officer arrived on scene and noticed damage to the vehicle’s passenger-side mirror. Robinson reportedly advised that he had struck a parked car on Hillcrest Drive when he pulled over to give the officer’s vehicle room. The officer asked Robinson if he would consent to standardized field sobriety tests, to which he would not consent, reportedly saying that he was nervous about failing the test.

An officer who had responded to the residence at which a possible physical altercation was reported determined that the brothers had been in an argument and that no criminal violation occurred.

The officer who pulled Robinson over then inquired about the collision in an attempt to locate a victim, at which time Robinson is reported to have said he didn’t know what happened and that he did not feel he should make any more statements.

The officer then placed Robinson under arrest for suspicion of driving under the influence. Upon arrival at KPD and after initially refusing to have the testing done, breath samples were obtained from Robinson. The first sample reportedly showed a BAC of 0.072, and the second 0.074. The officer then informed Robinson that he was being charged under suspicion of driving under the influence to the slightest degree. He was booked into the Mohave County Adult Detention Facility.