Mohave County geology: Can I dig gold on my land? 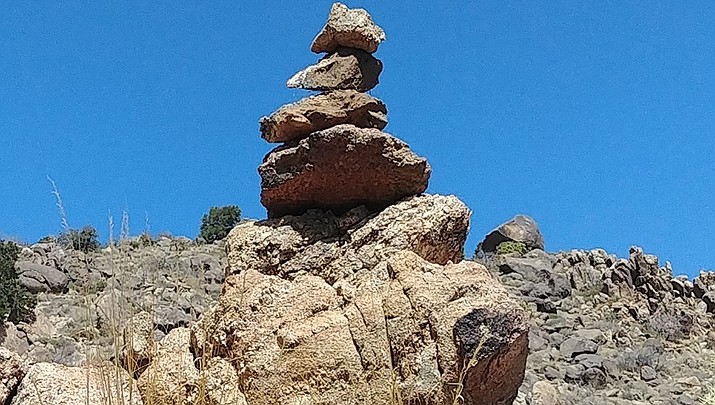 A mineral claim monument is pictured in the Cerbat Mountains. There’s a name scratched on the rocks under the monument – P. Fugina, 1881. (Photo by Luis Vega/For the Miner)

While four-wheeling with friends in an area where early prospectors had found placer gold, I was asked if it was legal for us to do some panning. I answered “yes,” a person can pan for gold on Bureau of Land Management (BLM) land, if it’s not claimed, and then realized my friends might not be familiar with the 1872 Mining Law. This law was instrumental in colonizing the West and is still on the books.

The settling of the West is different than the eastern U.S. Land ownership in the East was determined by various methods initially derived from English Common Law. Companies or investment groups were granted charters from the Crown to colonize an area and granted title to the surface and all resources of that particular area. The West was different. No longer a colony of England, most of the large expanse that was the western U.S. didn’t have owners, except for a few Spanish land grants. During the 1849 gold rush, miners found themselves in a legal vacuum so each mining area, or “mining district,” made its own mineral rights laws.

The U.S. federal government recognized the problem. They also realized that to incentivize people to leave their comfortable homes to go out into the wilderness and risk the many hazards that existed they needed a new law. Enter the 1872 Mining Law for federal lands.

In summary, the law creates a system where the person who discovers a mineral deposit has the right to develop that deposit. To claim the mineral rights, one needs to discover a mineral of value, put up a discovery monument and place a paper form documenting the land being claimed. The claim can only measure 600 feet by 1,500 feet in a rectangular shape (for lode claims; placer claims are slightly different). The claimant then needs to put up posts at each corner. Once the monuments are put up, copies of the location papers are filed with the county and the BLM. One now has the rights on that mineral discovery. Of course, the land must not be in an area closed to entry, such as a wilderness area, or have previous valid mining claims.

But doesn’t the title to the land I bought give me the right to mine the gold I find there? This is a common misunderstanding. Generally, the title on land bought in the West grants rights to the surface only. It doesn’t give mineral rights. In Kingman, most of the land was owned by the federal government and title to some land was transferred to the railroad company as an incentive to build railroads. They got both the surface and the mineral rights. When the railroad company sold the land to developers, the company reserved the mineral rights so even though one can build a house, they can’t mine gold on their land. If you don’t believe me, check your title. Look for the reservations section.

When out in the hills, one might find stacked rocks, wooden posts or PVC pipes (PVC is no longer legal for staking) stuck in the ground. These are the claim posts a prospector used to mark his claim. In Nevada, during the prospecting heyday of the 1960s and 1970s, so many PVC posts were being used for staking that the PVC posts became the unofficial “state tree.”

Once a claim is “perfected” (all the posts are put up) and documents filed, the owner can file with the BLM for permits to start mining. Some people think that a mining claim also gives them the right to build a cabin or set up a permanent trailer but this isn’t correct. It only gives the right to mine.

When the 1872 Mining Law was first enacted, there was a way in which a miner could “patent” the claim – gain title to the surface. The thinking was that no one would invest all the money into building a mine if someone else could buy the surface rights and charge the mine owner rent to be on the land. This worked out until some discovered they could stake a mining claim, work the claim for a while, then patent the land. Once surface rights were gained, they could sell the surface to developers or build homes on the land. The government put a stop to patenting mining claims to stop this process.

Areas with active projects include the Moss Mine and the Arabian project, (look for a drill rig near the wide curve of Highway 68 before it enters the flats on the way to Bullhead City.) Six Mile crossing south of Wikieup on Burro Creek Crossing Road is a hot spot for lithium exploration with many newly staked claims. The lithium occurs in clays of the Big Sandy Basin before the volcanic “dam” was breached and opened the drainage.

So, if there’s gold and no one has claimed the spot, stake a claim and start your own unofficial “state tree’ garden. But use wood posts. Most of the PVC posts are still in Nevada.

Pssst, wanna buy a gold mine?
Arizona copper mine ruling expected to have national impact
Oatman gets it first canvass in more than 25 years
US bans new mining claims on public land near Yellowstone
Feds favor mining ban near canyon
Event Calendar