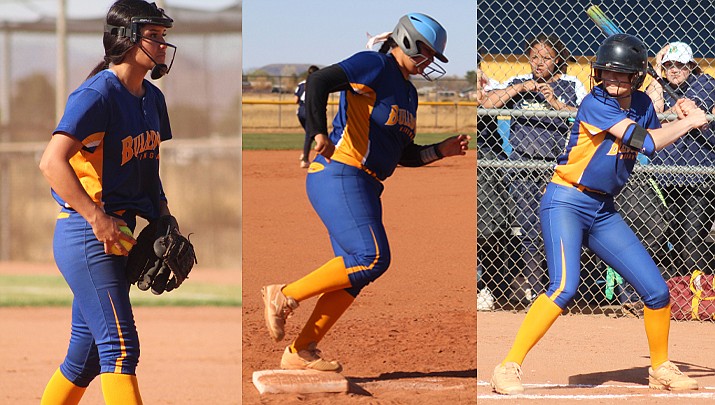 KINGMAN – To the victors go the spoils. In the case of the successful Kingman High School softball team, that means two berths on the Arizona Interscholastic Association’s Class 3A All-State first team.

“It’s the first time since I’ve been at the school that we’ve won at the state level,” Lee said. “I’m very proud of them for the dedication it took to be considered some of the top players in the state. The girls work year-round on their game and it showed,” Lee said.

Lopez earned her spot on the team by hitting .542 with 19 RBIs and 27 runs scored, plus a stellar .986 fielding percentage, with just one error all season.

Kingman also cleaned up in the 3A West regional awards, with Lopez being named Offensive Player of the Year and Valdivia Defensive Player of the Year. Four more Lady Bulldogs were named to the first team – Chamberlain, Marisela Abrego, Allie Cazarez and Brooke Carter. Also, Taisha Powsey, Faith BeKolay and Ashley Hartman were named to the all-region second team, and Trinity Wendland was an honorable mention.

“I’m very proud of how many players got recognition for the conference. The girls had a great season and worked really hard to earn these awards,” Lee said.

Kingman finished the regular season 12-1, but lost in the opening round of the Class 3A state playoffs.