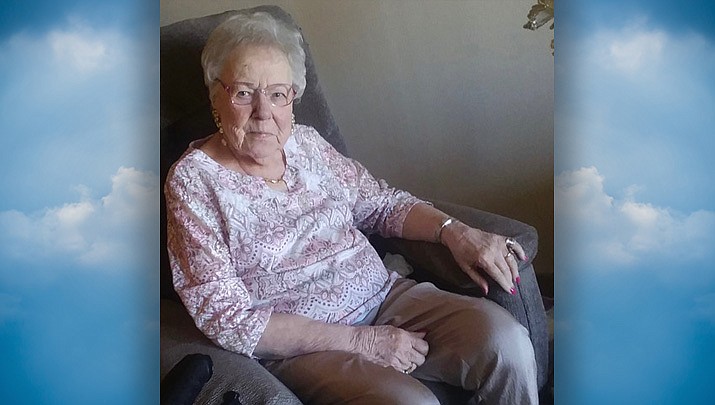 Ruth Vivian Nelson passed away Oct. 27, 2021, in Golden Valley, Arizona. Ruth was born in Racine, Wisconsin on Oct. 13, 1931, to parents Edwin and Katherine Erickson. She was baptized, confirmed and married in Epiphany Lutheran Church in Racine. Ruth graduated from Park High School in 1949 and then worked for the Massey-Harris company where her father had also worked. Ruth married Ronald Nelson in 1955 and they moved to San Diego in 1957. In June of 1962, son Michael joined the family.

She worked at Security Pacific Bank and retired from there in 1988. In 1989 Ruth and Ron moved to Parker, Arizona and loved living by the Colorado River. In 1996 life brought them to Kingman, Arizona where they lived in retirement, until Ruth’s recent move to Golden Valley. Ruth had been very involved as a long-term member of the Good Shepherd Lutheran Church in Kingman and served as treasurer and in the Women’s association. God has received a special angel in Ruth, who was preceded in death by her husband Ronald, son Michael and brother Frank. She is survived by her grandson Tyrus, and many loved nieces, nephews, cousins and friends.

A memorial service will be held Saturday, Nov. 13 at 11 a.m. at Good Shepherd Lutheran Church 3958 N Bank St., Kingman, Arizona. Ruth will be buried with her husband Ron at Mountain View Cemetery in Kingman.

To send a FREE card to the family go to www.sendoutcards/lietzfraze.