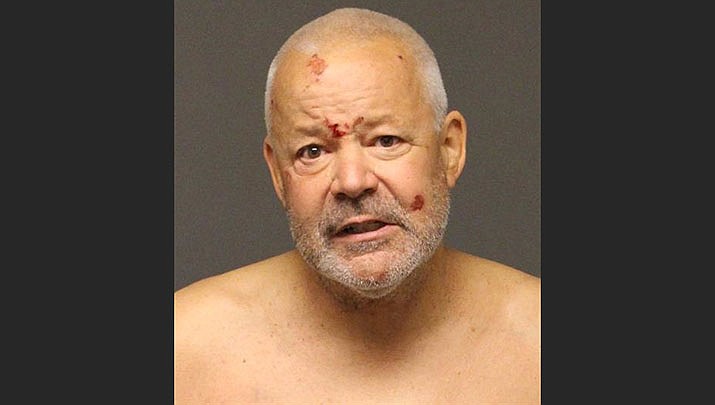 KINGMAN – Daniel Ray Phillips, 60, of Oakley, California, was arrested by the Mohave County Sheriff’s Office on Oct. 25 after allegedly kicking a deputy while being detained.

MCSO wrote in a news release that just after 5 a.m., deputies were driving on Highway 95 when they were passed by a white truck. Deputies began pacing the vehicle, reportedly observing that the vehicle was going approximately 80 mph in a 55 mph zone. The truck was further observed leaving its designated lane and changing lanes without signaling, law enforcement wrote.

A traffic stop was conducted and contact made with the driver, identified as Phillips. Deputies asked for the required documentation and Phillips reportedly only supplied deputies with a license. When asked about the speed limit in the area, Phillips is reported to have become argumentative and uncooperative.

Due to suspicion of impairment, Phillips was asked to step out of the vehicle. He refused to do so, according to law enforcement.

Deputies removed him from the vehicle and placed him in restraints. While detained, Phillips “continued to be belligerent with law enforcement and medical personnel,” the sheriff’s office wrote.

At one point, Phillips is alleged to have positioned himself so he was lying beneath the back bumper of the deputy’s patrol vehicle, at which point he is accused of kicking one of the deputies in the legs.

Phillips was transported to Valley View Medical Center for medical evaluation. Once cleared, he was transported to the Mohave County jail on suspicion of felony aggravated assault on an officer and resisting arrest, and misdemeanor reckless driving and exceeding the posted speed limit.