Electric car registration to increase in Arizona next year 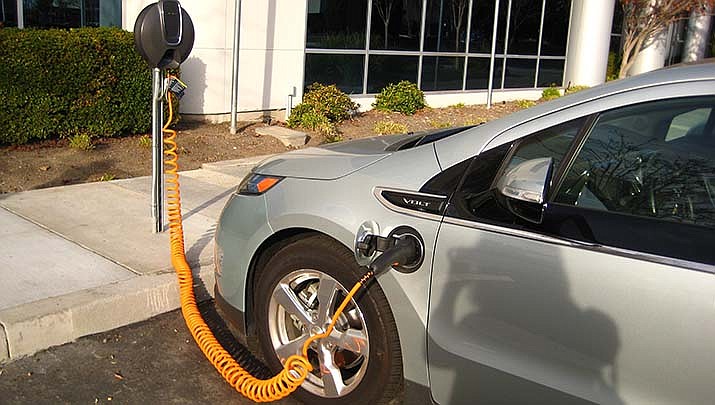 Starting next year owners of electric cars in Arizona will pay the standard rate for vehicle registrations. (Photo by the rabbit * lapin, cc-by-sa-2.0, https://bit.ly/3wQDT4g)

PHOENIX – Been thinking about buying one of those all-electric cars? How about one fueled by natural gas?

If you act by around Christmas, you could save yourself a lot of money, if not now then down the road.

And that’s because Arizona is changing the rules about how much it is charging to get your vehicle registered each year.

Put simply, it’s going to get more expensive -- but not for those who already own one by the end of this year.

The change is the culmination of years of efforts by some lawmakers to raise more money to build and maintain Arizona roads. But with hiking the gasoline tax a political non-starter, that left the more acceptable – albeit less financially lucrative – idea of making make the owners of the non-polluting vehicle pay their fair share.

In Arizona, vehicle license fees are based on 60% of original purchase price, with a tax rate of $2.80 for each $100 of assessed valuation.

But the assessed value of a $30,000 electric vehicle is 1 percent of its total base retail price. So that translates out to a $300.

Couple that with a tax rate of $4 for each $100 of assessed value leaves the owner with a $12 annual registration fee.

All that starts to change next year.

And beginning in 2023, the method of calculating the fees are equalized, meaning that same $504 fee regardless of how the vehicle is powered.

To make the change more palatable, lawmakers agreed to what amounts to a grandfather clause. Put simply, if you have one of what the state considers an “alternative fuel’’ vehicle in your name by the end of this year, you get to keep that 1% assessment ratio.

You keep that ratio forever – or at least as long as you own the car or truck.

The same is true for those who buy a vehicle in 2022. That 20% assessment ratio stays in place even when the law changes in 2023.

And that end-of-year date is firm.

If you buy from a dealer, the Motor Vehicle Division will accept the date of the temporary registration permit as the official registration date, even if you don’t yet have your actual plates.

But if you’re buying from someone else, the documentation for a new title must be processed at an MVD office or authorized agent before Jan. 1 to qualify for the lower rate, regardless of when you actually purchased the vehicle. And what’s important this year is that MVD offices will be closed on Friday, Dec. 31, to observe the New Year’s Day holiday.

What won’t affect your tax rate, though, is paying off your vehicle loan and having the lender’s name removed from the title.

For the record, MVD defines eligible alternative fuel vehicles as anything that can be powered by electricity, hydrogen, solar, or natural gas, whether compressed or liquefied petroleum. Hybrid vehicles that have gasoline-powered motors no matter how small, do not qualify.

The agency reports that there currently are about 63,000 alternative fuel vehicles in Arizona out of about 7.44 million total registered vehicle. Of those 63,000, MVD reports about 41,000 are electric.

Environmental issues aside, there are other reasons to go electric, what with gasoline approaching $4 a gallon and the price of natural gas unpredictable.

And there’s something else: Regardless of when an alternative fuel vehicle is first registered, MVD will issue a special license plate which allow access to HOV lanes at any time, regardless of the number of passengers in the vehicle.

There is, however, another factor that needs to be considered: It’s just an expensive time to buy a new vehicle.

The price of many cars and trucks – regardless of how they are fueled – has been on the rise, with much of that linked to the supply chain issues that have left manufacturers without some of the parts they need.

Last month Tesla announced a new round of price hikes for some of its vehicles.

Kelly Blue Book reported that the transaction price of the average new vehicle reached $45,031 in September, an increase of more than 12% in the past year.

On the flip side, there’s reason to believe that prices may ease for those who wait – and not just based on the assumption that those supply chain issues will get resolved. Both Car and Driver and Automotive News say that the cost of those electric car batteries that make up so much of the cost of those vehicles are expected to drop in 2023 and beyond, to the point where the cost of these cars and trucks becomes comparable with those fueled by gasoline.