House to vote on censuring Gosar over posting violent video 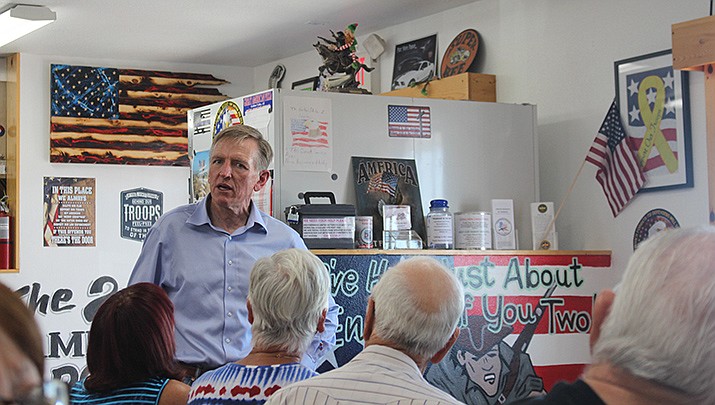 The U.S. House was expected to vote Wednesday, Nov. 17 on a resolution to censure U.S. Rep. Paul Gosar (R-Arizona), who represents the Kingman area in Congress. Gosar posted an animated video depicting him striking Rep. Alexandria Ocasio-Cortez with a sword. (Miner file photo)

WASHINGTON - The House is expected to vote Wednesday on a resolution to censure Republican Rep. Paul Gosar of Arizona for tweeting an animated video that depicted him striking Rep. Alexandria Ocasio-Cortez, D-N.Y., with a sword.

The resolution would remove Gosar from his two committees: Natural Resources and the Oversight and Reform committee, on which Ocasio-Cortez also serves.

“When someone sends out a tweet or any other illustration of him or her murdering somebody on the House floor, that to me goes far beyond the pale and that person should not even be a member of this body,” Rep. James Clyburn, D-S.C., the No. 3 House Democrat, told CNN on Wednesday.

Republicans warned Democrats to be careful about dictating the punishment of those who serve in the minority because of the precedent it will set.

“This is a dark and dangerous road the majority is going down,” Rep. Tom Cole of Oklahoma, the ranking Republican on the House Rules Committee, said Tuesday. “I urge you for the future of the chamber to rethink this course.”

Gosar posted the video over a week ago with a note saying, “Any anime fans out there?” The roughly 90-second video was an altered version of a Japanese anime clip, interspersed with shots of Border Patrol officers and migrants at the southern U.S. border.

During one roughly 10-second section, animated characters whose faces had been replaced with Gosar. Greene and Rep. Lauren Boebert, R-Colo., were shown fighting other animated characters. In one scene, Gosar’s character is seen striking the one made to look like Ocasio-Cortez in the neck with a sword. The video also shows him attacking President Joe Biden.

“I don't know if it was to create harm, if it was to incite violence, if it was to fuel hate, but it probably accomplished all of those things," said Rep. Veronica Escobar, D-Texas. “We have an obligation to live up to the highest standards possible, but also to hold each other up to those standards. If we don't do it, then what we are doing is allowing for a new norm to be created."

Last week, Gosar issued a statement saying the video wasn’t meant to depict harm or violence, calling it instead “a symbolic portrayal of a fight over immigration policy.”

Gosar told his House Republican colleagues during a private meeting Tuesday that he would never espouse violence or harm to anyone. He noted that he took the video down from his account, according to a person in the room who spoke on condition of anonymity to discuss the private meeting.

Ocasio-Cortez said he has not apologized to her.

“It’s been well over a week. He not only has not apologized," she said. “He not only has not made any sort of contact or outreach, neither he nor the Republican leader (Kevin) McCarthy, but he has also doubled down by saying that I am somehow, you know, representative of undocumented people.”

The resolution states that depictions of violence can foment actual violence and jeopardize the safety of elected officials. It also cites the insurrection of the U.S. Capitol on Jan. 6 as an example. It says violence against women in politics is a global phenomenon meant to silence and discourage them from seeking positions of authority and participating in public life, with women of color disproportionately impacted.

If approved by a majority of the House, censure requires the censured lawmaker to stand in the well of the House as the resolution of censure is read aloud by the House speaker.

The House has censured its members on 23 occasions. The last censure resolution was approved in 2010 involving Democratic Rep. Charles Rangel, the former chairman of the powerful House Ways and Means Committee, for financial misconduct. The censure carries no practical effect, except to provide a historic footnote that marks a lawmaker's career.

Rep. Adam Kinzinger, R-Ill., was one of the few Republicans saying he would vote to censure Gosar.

“We have to hold Members accountable who incite or glorify violence, who spread and perpetuate dangerous conspiracies. The failure to do so will take us one step closer to this fantasized violence becoming real," Kinzinger tweeted.