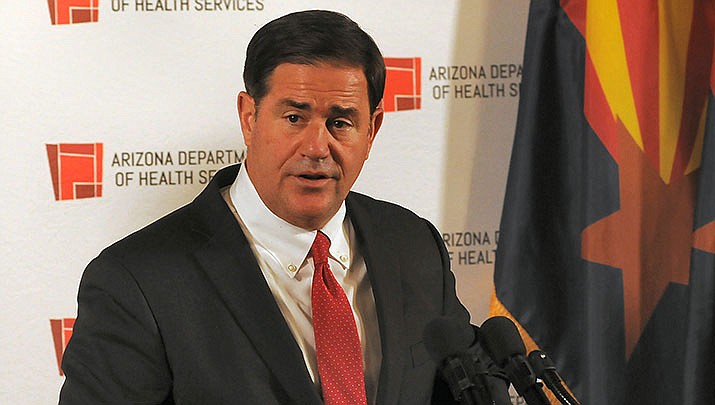 Arizona Gov. Doug Ducey got a turn in the spotlight among some of the Republican Party’s top elected officials, donors and strategists this week as he oversaw the Republican Governors Association annual meeting in Phoenix. (File photo by Howard Fischer/For the Miner)

PHOENIX – Gov. Doug Ducey got a turn in the spotlight among some of the Republican Party’s top elected officials, donors and strategists this week as he oversaw the Republican Governors Association annual meeting in Phoenix.

Ducey, who is barred by term limits from seeking a third term, has been mum about his own uncertain political future as he enters his final year as governor. But his role as chairman of the group charged with raising millions of dollars to elect Republican governors gives him connections with the party’s top donors that could be valuable if he decides to run for office down the road.

Ducey leads the group at a time when Republicans are ascendant and see Democrats as weighed down by President Joe Biden. Republicans this month won the race for governor of Virginia and came surprisingly close to winning in New Jersey — both states where Biden won overwhelmingly last year.

“We intend to protect our incumbents and keep our red states red,” Ducey told reporters. “But we’ve also shown we can win in any state in the country.”

Meanwhile, the campaign to replace Ducey has gotten an unusually early start, particularly on the Republican side as former television anchor Kari Lake has energized the GOP base and wrangled an endorsement from former President Donald Trump.

Ducey predicted it will be “a very spirited cycle" but declined to weigh in on the crowded field, saying he’s been focused on the Virginia campaign.

“I’m going to care very much about who my successor is,” Ducey told reporters. “I’ll have more focus and more to say on what’s happening in Arizona as the campaign unfolds. I’m not gonna say anything at this time.”

Ducey has personal experience in what can happen when a governor delays announcing an endorsement for a successor. In 2014, when he was locked in a tight six-way GOP primary and neck and neck with former Mesa Mayor Scott Smith, Ducey benefited from then-Gov. Jan Brewer’s dithering. By the time she endorsed Smith just 19 days before the primary election and a week after ballot were mailed, Ducey had nailed down his party win.

Ducey is currently the chairman of the RGA and will stay on next year as the co-chairman along with Nebraska's Pete Ricketts, who also is term-limited. The role gives him significant time with the party's top figures, connections that could be valuable if he decides to run for Senate or another office down the road, such as president.

The GOP is on offense in states with Democratic governors where Biden lost or won by a narrow margin, most notably Kansas, Wisconsin, Michigan and Pennsylvania. The party will also be playing defense in Arizona, which has moved away from its staunchly conservative roots over the past decade, along with Maryland and Massachusetts, deeply Democratic states with Republican governors.

Ducey has stayed out of the race for U.S. Senate despite public and private entreaties from heavy hitters including Sen. Rick Scott of Florida, who is overseeing the GOP’s recruitment and fundraising efforts for Senate races. He was questioned repeatedly this week about the Senate race but said he’s not running.