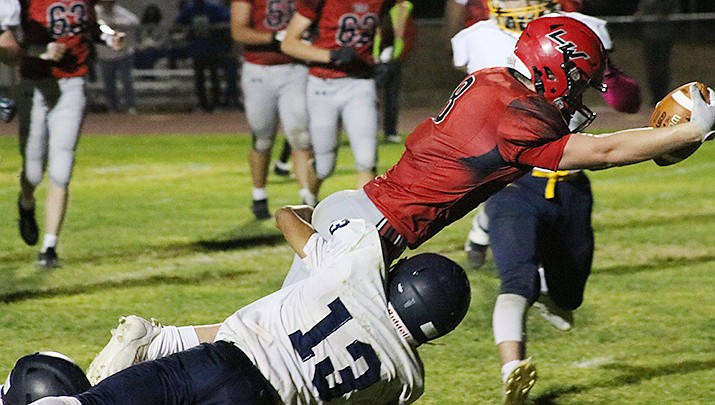 KINGMAN – The Lee Williams High School Volunteers are headed to the playoffs for the first time since 2014 and for the first time in Class 4A, with head coach Patrick O’Boyle saying his battle-tested No. 11 squad is looking forward to the matchup against sixth-seeded Apache Junction on Friday, Nov. 19.

O’Boyle said the team’s success results from a culmination of a few factors over the course of multiple years, including a run of talented classes and a squad that now knows what it takes to be a winning team.

“This year’s group has just been really resilient,” O’Boyle said, noting the team has starters ranging from freshmen to seniors. “They put in a bunch of time in the offseason and bonded really well with each other.”

O’Boyle said the players hang out with each other.

“They’re all best friends and they’re all family. It’s been a real treat to watch these guys grow as a team, and their bond is what’s allowing us to play well right now.”

“They’re really explosive on offense and score a ton of points,” O’Boyle said, noting the opponent’s talent at quarterback, running back and wide receiver. “This is by far probably our toughest test yet.”

Apache Junction’s junior quarterback Gavin Limongello has completed 119 passes on 174 attempts this season with an average of 15 yards per completion and nearly 200 yards a game. He’s thrown 14 touchdowns and just four interceptions, along with contributing 729 yards on the ground on 89 carries. Sophomore Isaiah Sovoie leads Apache Junction in both rushing and receiving yards at 1,599 on 180 carries and 263 yards on 22 receptions, respectively.

However, O’Boyle said his squad is no stranger to tough games this season, as six of Lee Williams’ opponents from this year are also in the playoffs. “We’re battle tested and our kids are looking forward to the matchup,” he said.

Senior quarterback Devean Santos has completed 75 passes on 154 attempts for the Vols this year, averaging more than 18 yards per attempt and 154 yards through the air per game. He’s thrown 14 touchdowns and eight interceptions. Santos is also the Volunteers’ leading rusher with 941 yards on 110 carries, followed by senior running back Jimmy Berry with 672 yards on 125 carries. Sophomore Kruz Yocum has contributed 224 yards on just 30 carries.

Junior Troy Edwards leads the Vols in receiving yards with 505 on 25 receptions, followed by senior Angel Larios with 364 yards on 20 receptions and freshman Thomas Doxtader with 299 yards on 17 catches.

The Vols are led on defense by senior linebacker Payton Wayman and junior linebacker Brayden Petersen, each with 75 solo tackles. Sophomore Devin White leads Lee Williams in interceptions with three.

“If it ain’t broke, make it better,” O’Boyle said. “We’re working on bettering ourselves, watching film, lifting weights. In order of us to be successful we’re just going to have to continue to play our game. It’s going to be a tough battle and we know that.”

O’Boyle said success will come down to efficiency on offense and making critical stops on defense, as well as “controlling the special teams’ game as we’ve done in many games this year.”

His squad’s bond will see them “fighting for each other all night.”

“I’m just proud of our kids, proud of our coaches and all of the work that’s been put in, the amount of time and effort this year,” O’Boyle said. “We’re excited to get out and play Friday.”