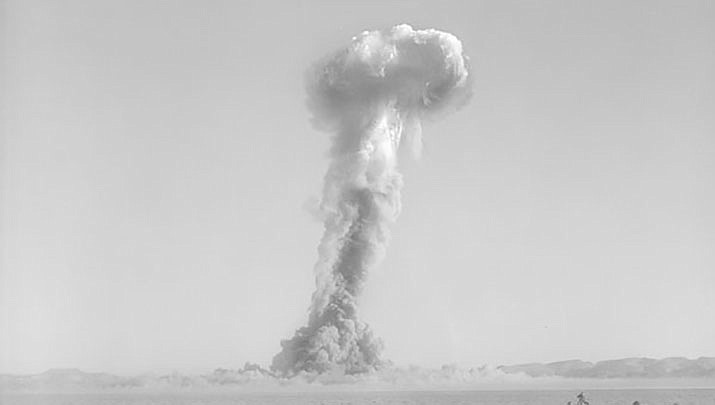 U.S. Rep. Greg Stanton’s (D-Phoenix) bill to extend coverage to downwinders in lower Mohave County was advanced yesterday by the House Judiciary Committee with a bipartisan vote. A nuclear test in Nevada is pictured. (U.S. Department of Defense photo/Public domain)

Stanton’s office wrote in a news release that the bill, H.R. 612, the Downwinders Parity Act of 2021, would update the Radiation Exposure Compensation Act to include all of Mohave County and Clark County, Nevada as affected areas. It would allow victims of radiation exposure from those communities who became sick with cancer to receive compensation from the federal government.

While a version of the legislation has been introduced in each Congress since 2010, first by Sen. John McCain and Rep. Trent Franks, the bill had not earned a committee hearing nor vote in either the House or Senate until Stanton “aggressively pushed for the effort to move forward,” the release stated.

“For far too long, northwestern Arizonans have been victimized and forgotten by the federal government,” Stanton said. “Congress has the opportunity, and the responsibility, to deliver justice – but time is running out.”

Supervisor Jean Bishop of District 4 called it “illogical” to deny RECA coverage to the two counties closest to the atomic blasts. Bishop believes she and her family were exposed while living in Las Vegas during the testing in the 1950s, as well as in Mohave County during the mid-1950s to 1960s.

“I am hopeful this will be the turning point in the long pursuit for justice for Mohave and Clark counties,” Bishop said in the release. “The deadly consequences of the nuclear arms race should not and cannot be swept under the rug.”

“Since 1990, partial restitution has been available for certain eligible individuals under the RECA. While the program has provided tens of thousands of well-deserving individuals with compensation, other equally deserving citizens of Clark and Mohave counties have been shut out of the program. The Downwinders Parity Act of 2021 will right the wrongs that ripple through the communities in these counties that have been tragically impacted by our government's nuclear program,” said Laura Taylor, an attorney in Prescott who has been processing claims through the Radiation Exposure Compensation Program for the past 18 years for those individuals who are eligible for compensation.

Stanton has fought for this expansion throughout his two terms in Congress, introducing similar legislation last term and pushing the solution as an amendment in the 2021 and 2022 National Defense Authorization Acts.

In March, “at Stanton’s urging,” the release states, the House Judiciary Committee held a hearing on the impacts of radiation exposure for Downwinders. It was the first time in two decades that victims in the Southwest were given an opportunity to speak before a House committee on the urgent need for justice for their communities. The bill now heads to the full House for consideration.