Locals have tough deer hunts on the Arizona Strip 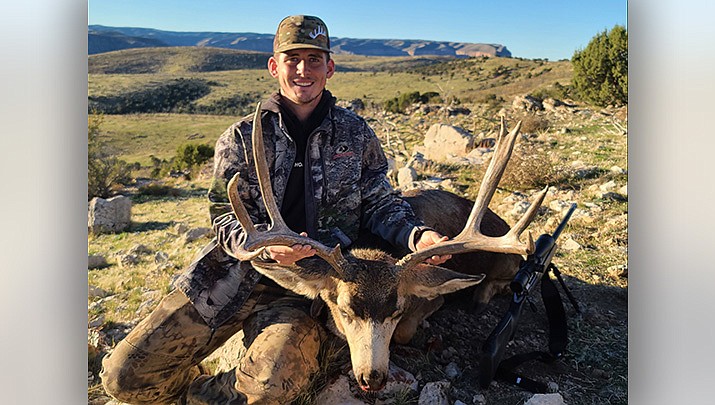 Ask just about any hardcore mule deer hunter in Mohave County what they think is the best quality mule deer area is in Arizona, and I’ll bet 99% of them will say: “The Arizona Strip, Unit 13B.”

And they are right.

This huge unit located in the northwest corner of the state in Mohave County is known throughout the mule deer world as the place where giant bucks roam.

It is the most sought-after deer tag in Arizona, and to thousands of residents and nonresidents alike, it is a tag they hope to draw one day.

This year there were over 8,500 applicants for these coveted deer tags in Unit 13B. Of those, 3,900 were Arizona residents, while 4,600 nonresidents applied.

With only 80 tags being authorized, and under the 10% cap for non-residents, that meant that a maximum of eight nonresidents could get a tag. The remaining 72 tags went to Arizona residents.

But at least two local sportsmen were among the lucky Arizona residents who drew a tag this year.

Larry Buggeln is 82 years old, and this was the third tag he’s drawn in the past 25 years on the Strip. Buggeln went into this year’s draw with 18 bonus points and drew tag number 15.

Buggeln decided to do the hunt unguided and was assisted by his son and long-time friends and California residents Charlie Fox and Paul English.

Delmonico was assisted on the hunt by a guide service called A-1. His guides were very familiar with the Strip. He also had the help of his father Dan, and friend Tony Campbell.

While they did their hunts in different ways, both saw about 30-35 bucks before each took a buck on the eighth day of their 10-day hunts.

Both hunters commented on how disappointed they were for the most part in the quality of the bucks they had seen. Buggeln noted that due to the drought the feed was not good. Dan Delmonico also stated that the feed was poor and that the rain had not come at a time when it was the best to support antler growth. “We were told by the Arizona Game and Fish Department that the antler growth was down substantially.”

Both hunters noted they had very rough hunts. However, both ended up taking bucks. Buggeln took a 4x4 that he estimated weighed between 200-225 pounds, while Delmonico took a 4x3 buck that sported a rack that was 29 inches wide with a lot of mass.

Buggeln noted that he had not seen any hunters take bucks like the unit is known for, but he had an awesome time with his son and two friends.

Dan Delmonico said he had only heard of one buck being taken that would score over 200. However, the buck that Delmonico took was his first mule deer ever, and he was happy with it, even though they saw other bucks that they thought were bigger and they had passed on.

Delmonico is going to have Henry Aguilar at Henry’s Artistic Wildlife in Kingman do a shoulder mount on his trophy.

Both sportsmen were glad to put venison in their freezers as a result of their hunts on the Arizona Strip.