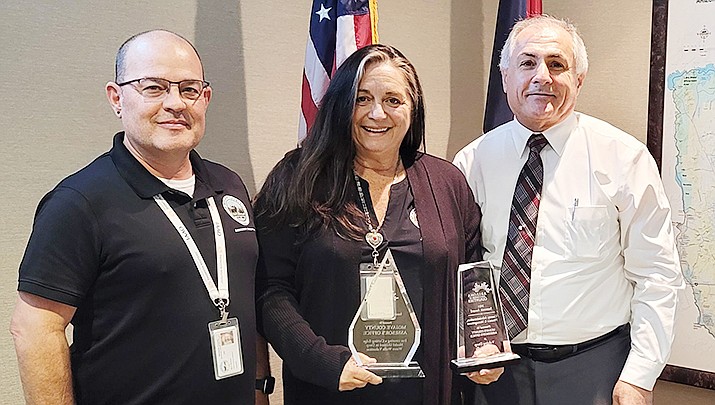 KINGMAN – The Mohave County Assessor’s Office received the Summit Award for Valuing Deep Water Wells from the Arizona Association of Counties at AAC’s annual conference in Phoenix this month.

“Our Deep Well Valuation project was a success in the making,” Mohave County Assessor Jeanne Kentch said when accepting the award. “2019 was the first year our deep-water well values were included on the tax roll.”

“This was born out of the community’s desire to protect its future ground water availability in the Hualapai water basin of Mohave County and the assessor’s desire to equitably distribute the burden of taxation,” the county continued. “The Assessor’s Office commenced with the difficult task of valuing deep ground water wells in the newly developed farms north of Kingman.” So far, 161 wells have been added, contributing approximately $2.17 million to the county’s yearly tax revenue.

“The revenue was not the only positive results after our values were implemented. California nut farmers, for example, started the transition to Arizona because of the water woes in the Delta,” the county wrote, explaining the cost of water not allowing the farmers to make a profit farming nuts.

Those farmers bought land in Arizona from foreign investors because of the cost and risk associated with the water in California. “The relatively small deep-water well tax liability made it an easy decision ...” the release noted.

Kentch called it a win-win for the community. “Not only did they have additional taxpayers, keeping their slice of the pie smaller, but farming nut trees consumes only one-third the water as farming alfalfa,” Kentch said. “We think this project has allowed a win for all involved.”