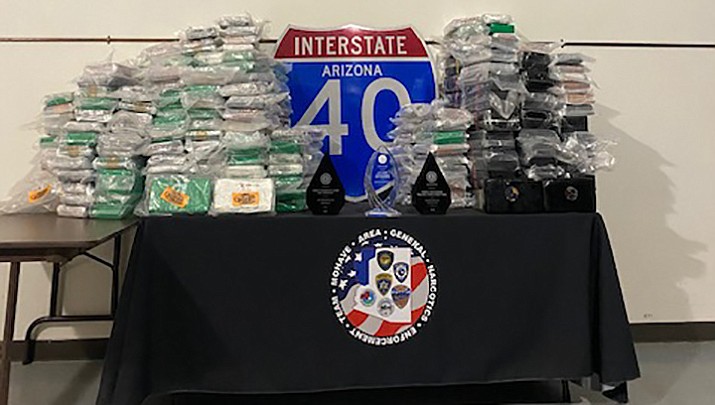 Kingman police seized nearly 935 pounds of cocaine after a traffic stop on a commercial vehicle on Interstate 40 on Saturday, Nov. 20. (KPD photo)

KINGMAN – A Kingman Police Department officer and his K9 partner, Sevende, recently conducted a traffic stop on Interstate 40 that reportedly resulted in the location of 935 pounds of cocaine with an estimated street value of more than $22 million.

KPD wrote in a news release that on Saturday, Nov. 20, an officer conducted a traffic stop on a commercial vehicle west of Kingman, in the proximity of milepost 44 on I-40.

The officer deployed his K9 during the traffic stop, with the K9 reportedly alerting to the odor of narcotics. The Mohave Area General Narcotics Enforcement Team responded to assist in the search of the vehicle.

During the search, detectives reportedly located 424 kilos, or nearly 935 pounds, of cocaine hidden in the trailer. According to law enforcement, the cocaine has a wholesale value of approximately $12.2 million and a street value of more than $22 million.

The driver of the vehicle, a 52-year-old male from Ontario, Canada, was released pending further investigation, according to the news release.