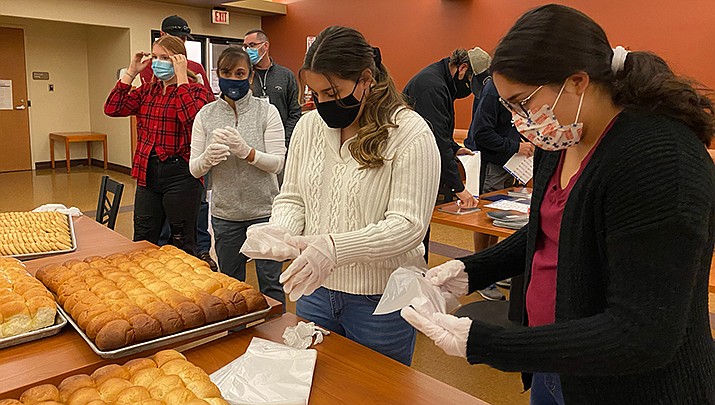 Homebound seniors have received Thanksgiving and Christmas meals courtesy of the Kingman Regional Medical Center Foundation and organizer John Kirby for the past decade. But now Kirby needs someone to take up the torch for the effort to continue.

Kirby has been the organizer of the annual events for more than a decade, but will be out of town this holiday season.

“So I’ve been trying to recruit someone to take over,” Kirby said, adding that he’s had no luck so far. “It’s not a lot of work; it’s fairly easy. I just need someone to pick up the torch.”

Kirby said the effort sees the foundation collaborate with the Meals on Wheels program. Seniors enrolled in the program have their interest in receiving holiday meals gauged, with Meals on Wheels representatives then returning that information to the organizer.

The day of food distribution sees volunteers handle the plating of the food as well as delivery, but the organizer must be present to ensure all runs smoothly.

“The whole day takes me an hour and a half from when I leave my house,” Kirby said. “We’ve got it down to a science.”

Kirby said the KRMC Foundation has been very generous in the past in supporting the initiatives, and hopes that it would continue to provide funds. The foundation confirmed on Friday, Nov. 19 that it is interested in continuing the effort so long as someone is found to take over Kirby’s role.

“If he found someone to take it over, absolutely we’d be OK with funding it,” the foundation said. “Obviously, we want to be able to give back to the community as much as we can. We’re open to continuing the relationship with whoever fills that spot.”

Kirby said children who are brought to volunteer learn the importance of volunteerism and community. The seniors see benefits as well, aside from the food itself.

“It’s a wonderful event for everybody involved,” Kirby said. “Often times when the senior opens the door, that person delivering the food may be the only person they interact with on Christmas or Thanksgiving Day.”

Anyone interested in taking over Kirby’s role as organizer is encouraged to contact him at kirbyaz@citlink.net, or leave a message with Angle Homes at 928-718-1550.

It’s already too late for an organizer to be found for Thanksgiving meal deliveries, but if one is found soon, Christmas meals will be a go for December.