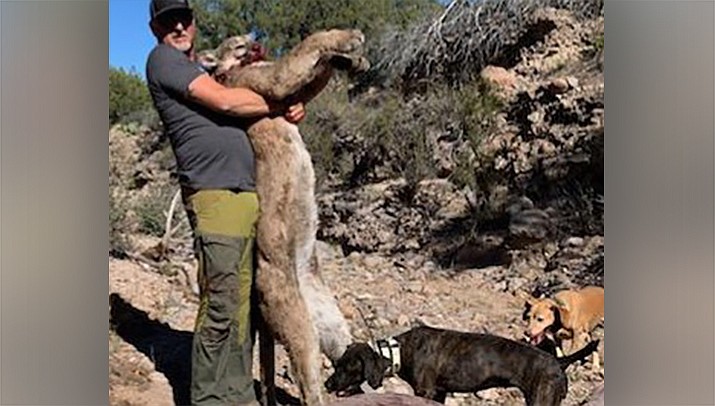 With the fall hunting seasons winding down, there have been some very exciting stories that I’ve heard from local sportsmen.

Recently I learned that Kingman resident Mike Cobb, who is an avid sportsman, had a hunting experience that proves once again that hunting with help from friends and neighbors provides extra benefits.

And in this case with Cobb, helping out his friends ended up with him taking a true trophy of a lifetime, a giant mountain lion.

Cobb was out in his favorite deer unit, Unit 18B, on a deer hunt with friends Jeff and Misty McCanns, and their daughter Courtney.

While they didn’t see as many bucks as they have in the past, both Mike and Courtney were fortunate to bag a buck.

On the second weekend of the hunt, Mike couldn’t meet up with the McCanns family until the last day of the hunt.

He would join the McCanns family to assist in glassing for deer.

They were not having a lot of luck finding deer but Jeff glassed up one of the most elusive and secretive big game animals in Arizona – a mountain lion.

Jeff had heard a group of coyotes howling and after he had located them, he found out why they were howling. The coyotes were howling as the big cat had killed one of their pack, and they were showing their displeasure with that situation.

They learned that the lion had eaten part of the coyote it had killed, and had covered up the rest of it, trying to keep scavengers away. Lions often go back to their kill and eat more of the kill.

Mountain lions are legal to hunt in Arizona, but Jeff didn’t have a tag, so he called his friend Mike Cobb, who did have a tag and was a few miles away.

It was about 40 minutes later that Mike arrived and he looked at the bedded cat through a spotting scope. A plan was made for Cobb to make a stalk on the lion while the McCanns watched and waited.

Cobb was able to get within 60 yards of the lion when the wind swirled and gave away his position.

The lion took flight and was last seen running over a hill. Cobb made a long walk back to his truck and met up with Jeff and Misty.

They decided to call fellow Kingman resident Tony Campbell, who has trained dogs that he uses to hunt lions. Almost two hours later, Campbell and his dogs arrived.

They went to the area where the lion had last been seen, and the dogs tried to get on the trail of the lion. But the trail was cold and the dogs had trouble getting the scent.

Cobb took Campbell to where the coyote was buried and much to their surprise, the lion was nearby.

The dogs gave chase and it wasn’t long before the cat had climbed a tree to escape the dogs.

Cobb was able to get close enough for a shot, and the lion fell out of the tree. The dogs surrounded the cat, but he wasn’t dead and a fight ensued. Several dogs received injuries that would later require medical attention. But the chase wasn’t over, and a second shot put the lion down for good.

Cobb’s lion was a big male, and was estimated by the Arizona Game and Fish Department to be between four and five years old. It measured 8 feet 4 inches from its nose to the tip of its tail.

This was the first time that Cobb had ever taken a lion in his long hunting career. He had seen a lion before, but never had the opportunity to take one.

Cobb is having the lion mounted by local taxidermist Henry Aguilar. He is utilizing the meat to make sausage and jerky.

Cobb said he was thankful for the opportunity to hunt the lion. “If it wasn’t for the help of my friends, this would never have happened,” Cobb said.