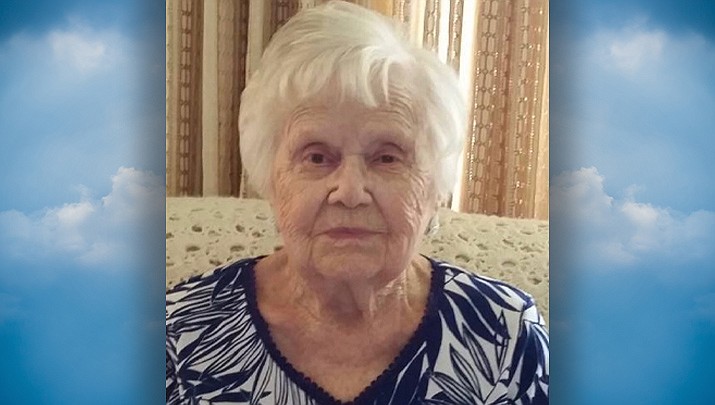 Wilma Catherine Woody went to be with her Lord and Savior Jesus Christ on Nov. 15, 2021. Wilma was born in Kingman, Arizona on May 29, 1921 to Clarence and Beulah Nickell. She was the first born of her siblings: Cora June, C.A. and Leslie. The family moved to Needles, California when Wilma was 2 weeks old, but they eventually moved back to Gravette, Arkansas when Clarence took over his father’s flour mill.

Wilma married Emmett Woody in September 1943 and was blessed with two daughters, Saundra in August 1944 and Belva in June 1950. Sadly, Emmett died in May 1952, the result of a work truck accident in Taft, California. In 1954, Wilma married Sherman Woody, Emmett’s younger brother. After living in different California locations due to Sherman’s work in the oil industry, they made their home in Newhall, California. After retirement, they moved to Kingman, Arizona in 1989.

They were married for 46 years until his passing in 2000.

Wilma committed her life to Jesus at an early age. She was devoted to her faith and was a loving wife and mother, who created a warm and inviting Christian home. When she and Sherman were travelling for his job or for pleasure, she always found a church to attend. On longer visits to a new town, she became involved in church ministry. A woman of God with a servant’s heart, Wilma could always be found teaching a Sunday School class, helping others in need, supplicating as a fierce prayer warrior, and mentoring many on their journey of faith, especially younger women new in their walk with Jesus. Wilma was a “spiritual mother” to many over the years. She loved tending her roses, entertaining friends and relatives, visiting friends and family throughout the country, and decorating her home for the holidays. Her hobbies also included sewing, crocheting and reading.

Wilma is preceded in death by her parents; her husbands; her daughter Sandi; her siblings June, C.A. and Leslie; and sister-in-law Arna Mae Woody Fabanich. Wilma is survived by her beloved daughter Belva Perry (John); her granddaughters Kori Klaue (Kyle) and Jodi Gress (Dave), Marrissa Kanthack (Brandon) and Crystal Perry; as well as 13 great-grandchildren and one great-great-grandson. She is also survived by her sisters-in-law, Thelma Nickell and Nita Nickell, numerous nieces and nephews, and a lifetime of dear friends. Special thanks to Karen Thomet, her companion and caregiver the past two years.

Wilma’s Celebration of Life will be held in Kingman, Arizona at the First Southern Baptist Church on Hualapai Mountain Road immediately after the viewing from 10:15-11 a.m.