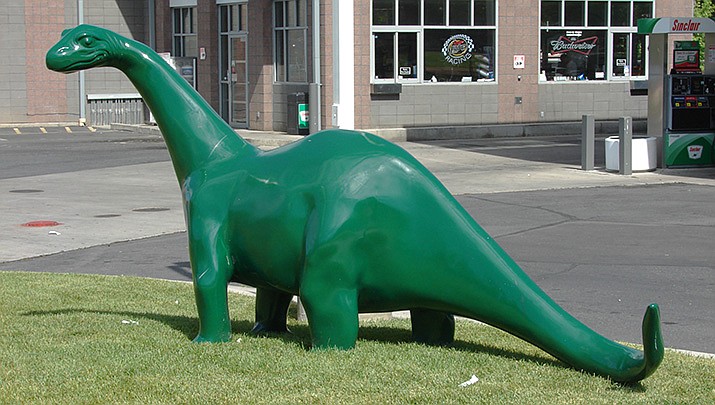 Dino, the Sinclair Oil Company logo dinosaur, is not the real source of oil. (Photo by An Errant Knight, cc-by-sa-4.0, https://bit.ly/3wMvAX7)

During the 1970s, world events and greed collided to set off the great Arizona overthrust oil and gas play. When Arab countries decided to boycott and punish the United States and western nations for supporting Israel during the Yom Kippur war, the price of oil skyrocketed from $3 to $12 a barrel. With the prospect of making incredible fortunes on the back of the inflated price of oil, U.S. oil companies scrambled to use every geologic tool and theory to find new sources of oil.

The traditional oil producing fields in the U.S. were being tapped out and there were even predictions that oil had reached peak-production and we would run out in the near future. Do you remember the apocalyptic movies with the hero guarding the last remaining tanker of oil in Waterworld and Mad Max? Dangle money in front of man and he will investigate every possible theory to obtain it. Enter the overthrust theory. When continents collide, the front edge of the continent is sometimes pushed over the back part of the edge forming a thrust fault. There are many examples of thrust faults all along the western part of North America from Montana-Wyoming- Utah to Arizona. The thrust faults in Wyoming formed traps where oil accumulated. These traps have been exploited and the theory was that if this happened in Wyoming, why not in Arizona? The target was projected to be an oil field of unprecedented size that would solve the worlds’ oil shortage. This was a target worth billions of dollars.

There are two parts to the oil game – source rocks and trap rocks. Contrary to what one of my friends believes, oil didn’t come from dinosaurs and methane gas from their farts. I guess he took the green dinosaur model commonly found in front of Sinclair gasoline stations as a serious representation of where oil came from. Hydrocarbons in rocks originated as plant matter that was deposited, along with sediments. As the “source” rocks were subjected to pressure by more sediments being deposited on top, the oil migrated to areas of lower pressure. If there’s a trap- some geologic situation that doesn’t allow oil to continue migrating, it gets trapped. The overthrust was projected to be a very large trap. In Wyoming it is. Why not in Arizona?

After expending millions on seismic lines in southern Arizona, the Anschutz Oil Company decided to drill a hole to a depth possibly reaching 20,000 feet to test the theory. An area south of Tucson was selected as the first test site and drilling commenced in 1980.

The well was completed on Feb. 14, 1981 at a depth of 18,013 feet without encountering hydrocarbons. As a matter of fact, they were in granite and metamorphic rocks the entire way. Economically, it was a bust.

Although there has been minor oil production from eastern Arizona (21 million barrels of oil), that production peaked in 1969. Lately, the majority of hydrocarbon drilling has been for natural gas, helium and carbon dioxide with most of the activity focused in the area of the Holbrook Basin which is east of Flagstaff and south of Holbrook.

The Sedona area has a trace amount of oil. If you’ve ever taken a swim in Oak Creek, you might have noticed a thin film of oil on the water. This is from trace amounts of hydrocarbons in the sedimentary rocks, not an uncommon occurrence.

Mohave County was also part of this oil play. Seismic lines have been run across Red Lake and even as late as the 2000s, there have been companies running seismic lines in Golden Valley. I remember being called by friends asking what was going on when they saw large trucks lifted on hydraulic legs and moving back and forth. My friends thought it was some kind of government plot to investigate the population. I tried to calm their fears and told them these were called “thumpers” – large trucks that create seismic waves to study the subsurface in search of oil. It wasn’t the government.